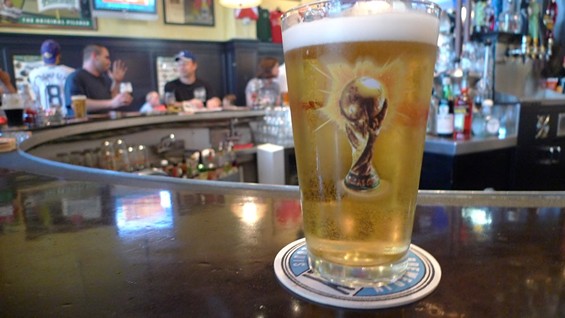 The lingering question after watching the American soccer team get robbed of a comeback victory against Slovenia earlier today has nothing to do with the offside rule or the poor eyesight of referees from Mali.

No, the more perplexing (but less frustrating) query is this: Does anyone really think that bar hopping at Irish pubs in downtown St. Louis is akin to globetrotting?

Four bars -- The Dubliner, Flannery's, The Over/Under and Tigín -- are participating in something called the "World Cup Watch Party Passport Program." Fork over $6 for a Budweiser pint glass with a World Cup trophy graphic and they give you a little pamphlet that vaguely resembles a passport with a schedule of the World Cup written inside in near-microscopic size print.

The only upshot is you get to keep the glass and get $3 refills on Bud at any of the four participating establishments...as long you get your little booklet stamped by by the bartender like you've gone through customs. This has to be the brain child of the same people who came up with the slogan "St. Louis: It's all within reach," does it not?

Cheesy though it may be, the promotion seems to be somewhat of a success. The bartender at the Dubliner pointed to a stack of about a two-dozen glasses as he handed one over, and said that the small pile was all they had left. He added that they sold out before the halftime of the USA-England match and had to re-order.

There was even one guy at the bar who actually used the passport. He arrived at halftime wearing a USA scarf around his neck. He introduced himself as Evan and said he worked as a referee for local college and amateur leagues. He started the game at Tigín but left, he said, because "everyone was really negative about how we were playing" and added "a change of scenery might do our team some good."

The US did, of course, play miserably early-on. The defense, lowlighted by the mistakes of Oguchi Onyewu, was non-existant and they ended up conceding two goals. That margin almost certainly spells defeat in soccer but, after a rocket from close range by Landon Donovan and an equalizer from Michael Bradley in the 82nd minute, the US was right back in it.

The red, white and blue-clad crowd at the Dubliner got rowdy in a hurry. Then, in the 86th minute, Donovan lined up for a free kick. The bar broke out in a chant of U-S-A! U-S-A! U-S-A! and roared with joy when Maurice Edu poked the ball past the Slovenian keeper. It looked like a comeback for the ages but the referee, Koman Couilibaly of Mali, called a mystery foul on the play that disallowed the goal.

Evan, the scarf-wearing referee, was incredulous. He'd spent most of the second half talking about how difficult it is to officiate games at World Cup level because of the speed of play. Calls that seem obvious on TV, he said, are often seen in super-slow motion from a completely different angle than what the ref on the field sees. Still, he fumed that this call was "completely botched," and he was just as ready to lynch the ref as the curse-spewing guy nearby with the American flag face paint and bandana.

While "botched" is a nice way to put it, the folks at SB Nation described the injustice more vividly, calling it "a flaming dead donkey of a call thrown into the face of sane officiating."

Yup, that about sums it up.