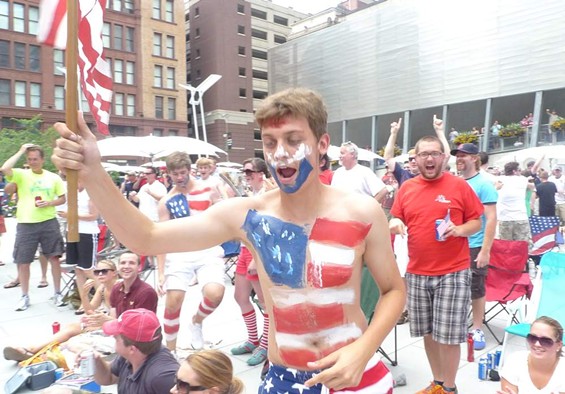 "Let's hear it for cloud cover!"

That's the cry that drew the second-loudest cheer of the day from St. Louis' American soccer hooligans. It was a sweltering 94 degrees in downtown on Saturday afternoon and the sun beat mercilessly down on a sizable crowd of fanatics on-hand to watch the United States take on England on a portable, giant-screen TV set up on the Old Post Office Plaza.

The loudest moment, of course, came when Robert Green, the British goalkeeper, botched a weak, dribbling shot from Clint Dempsey and allowed the U.S. to tie the game in the 40th minute. Revelers touched off smoke bombs, beat snare drums and tambourines, sounded air horns and otherwise went apeshit.

Then five painfully long minutes ticked away and the mass exodus to the nearby Schnuck's outpost began.

It was a madhouse inside the supermarket as the sun-soaked soccer fans hustled upstairs to the clean, air-conditioned bathrooms and mobbed the cold beer isle looking to restock their coolers. Alas, the downtown location has perhaps the most pathetic alcohol selection (except for wine) of any grocery store in town.

Fast friends were made as folks struck up deals to split the cost of six and twelve-packs of domestic cans and the only single-serve option -- 22 oz. aluminum bottles of A-B products -- flew off the shelves because they sold for $1.69, more than half the price of outdoor the booths across the block.

Honestly, it was an impressive turnout for the American contingent and, other than the oppressive heat, the Old Post Office Plaza was a fantastic place to screen the most-hyped match of the tournament. Faces were painted, Budweiser was slurped down and the lone England fans were taunted mercilessly.

Mark, a middle-aged man from London living in St. Louis and working for Reuters, sat front and center on the sidewalk with his family. The rowdier U.S. fans gave them endless amounts of grief, even gently slapping one of the younger Brits on the face just before kickoff.

All that ended just four minutes in when England's Steven Gerrard knocked a ball past goalie Tim Howard with the outside of his right foot. Then the emboldened Englishman taunted "At this pace we'll be up 30-0 at the half!"

Thankfully, the U.S. rallied and mounted several strong attacks. The unlikely equalizer came on a weak shot from Dempsey that glanced of the English keeper's mitts. The British announcer remarked, "That's not even something you'd see in schoolboy play." 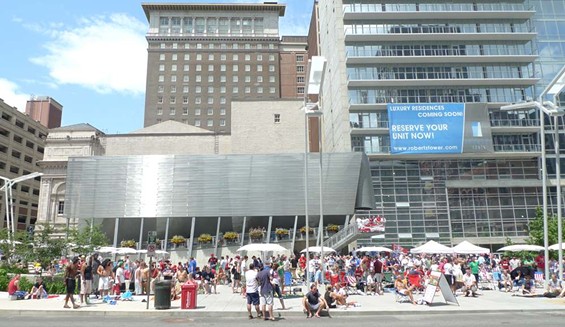 Both sides had good looks in the second half as the crowd simmered, almost silent in the summer heat. American Jozy Altidore nearly put the U.S. ahead in the 65th minute with hard shot on an impressive breakaway but the shamed English net-minder lucked out and the ball glanced off the near post. The game ended in a deadlock.

The ESPN broadcast referenced the 1950 World Cup match between the U.S. and England at least a dozen times -- each instance prompting yelps and applause from the locals -- but St. Louis' role in the historic 1-0 upset was mentioned just once. The shout-out to hometown hero Harry Keough, however, drew what was undoubtedly the third-loudest applause of the afternoon.
Wanna know where to watch the World Cup in St. Louis? Click here for the 22 best spots.