The World Goblet Round 1: South Africa vs. Spain

As in the World Cup, we're giving the host nation the honor of the first match. South Africa is represented by its best-known wine brand, Goats do Roam, but we've given them a tough match with a Spanish white that was the value pick by Bob Gray of Grapevine Wines in a recent edition of Wine Buy the Bottle.

This is a group stage match; three points for a win, one point for a draw. 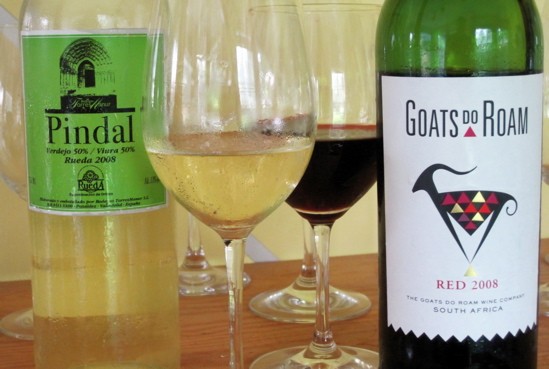 2008 Goats do Roam Red, Western Cape, South Africa ($9)
This wine is a deep, almost opaque reddish-purple color. The first whiff is of extremely ripe raspberries, but more lies beneath: a bit of earthiness, and a hint of flinty mineral. The wine is made with a blend of syrah, cinsault, mourvedre, grenache and carignan, its name a pun on said blend's south-of-France inspiration (Côtes du Rhône -- Goats do Roam, get it?).

Unfortunately, none of the depth you inhaled makes it out of the glass and into your mouth, where it tastes surprisingly thin and acidic. There's some tannic presence -- you know, that tea-like sense of having the enamel stripped right off your teeth -- but the fruit has been relegated to a secondary role. In short, this bottle's a notch better than your average value wine, but not a (wait for it...) world beater. It'd certainly hold its own alongside Schnucks pork steaks off the grill, or a pizza.

2008 Bodegas Torres Manur Pindal Rueda, Spain ($8)
Made from equal parts verdejo and viura grapes, this baby's a light lemony yellow in color. Citrus aromas are intense, along with a smattering of pepper and herbs. Like the Goats, it doesn't taste as great as it smells, but this is still very good juice -- an intriguing balance of fat fruit cut with lip-smacking acidity. That combo lingers nicely in your mouth.

Drink it all by its lonesome out on the deck, or at the table with a light summery dinner. In a nutshell, this is powerhouse value.

Ain't no flies on the Goats do Roam, but the Pindal is a very good wine, regardless of price. There's simply too much of a gulf in quality for this to be anything other than a clear victory for Spain.