Best Places to Watch the 2010 World Cup in St. Louis

Well, it's actually in South Africa, but thanks to the modern miracle known as ESPN, the games will be broadcast live at dozens of bars and restaurants in St. Louis.

There's nothing quite like watching the Cup with a pack of rabid soccer fans who feel their nation's national pride rides on the outcome of a particular match, so we compiled a handy guide to the best places to catch the games.

Based on the expected atmosphere and rooting interests the places will attract, we've broken them down into three categories: Pure Soccer Bars, America Eff Yeah and We Are the World.

Check out our special World Cup soccer bars guide over in the calendar section.

Whichever location you choose, be sure to bring your vuvuzela and your appetite -- and leave the macho conversations about American football at home.

The Scottish Arms Soccer is king at the Arms year round, but they kick things up a notch come World Cup time. The place has good food, great beer and scotch selections, killer bloody marys and a few strategically placed flat-screen TVs, making it the establishment of choice for some of the most passionate footie fans in the city.

Bartender Jeff says previous cups have attracted large contingents of Netherlands, England, Germany, Italy and U.S. fans, but because of the bar's reputation, the Arms attracts supporters of all nations.

They will be open for every match. Expect standing-room-only for marquee matchups.

The Amsterdam Tavern We named the Amsterdam St. Louis' "Best Soccer Bar" in our 2009 "Best of St. Louis issue." Here's an excerpt from what we wrote then:


Unlike most other places, though, football comes first at the Amsterdam. Scarves from dozens of European clubs decorate the walls (Arsenal and, of course, the Dutch club Ajax get the most prominent displays) along with memorabilia from Saint Louis University soccer and other historic local teams. There's no bar food available, but the selection of draft and bottled beer is ample. Best of all, the Amsterdam, like most places in Europe, where fútbol has always been king, prohibits smoking inside the tiny bar (smokers can puff to their lungs' delight on the massive outdoor patio). As for that other type of smoking the city of Amsterdam is known for, the only homage is a badass picture of Bob Marley decked out in soccer gear.

In a phone call yesterday, a staffer said they expect strong rooting sections from USA, England, Germany and Italy but added, "For this we'll get pretty much everybody, and they'll all be here at the same time."

The Amsterdam will be open for every match. The standing-room-only warning applies here too.

Barrister's The soccer bar of choice for county dwellers, Barrister tunes its six TVs to international soccer every weekend, whether the World Cup is happening or not. They will be open for all the World Cup matches and serving their usual tasty assortment of pub fare, plus brunch on the weekends. Bartender Monica says to expect "a crowd from all over Europe," at the Clayton establishment.

Downtown St. Louis The USA-England match at noon on Saturday, June 12, will be shown outdoors at the Old Post Office Plaza on a nine-by-fifteen-foot jumbo screen. On Friday night there will also be a screening of the film The Game of Their Lives, the story of the 1950 U.S. World Cup squad that featured several St. Louisans and upset England. Bring your own chairs; no coolers or glass containers.

Additionally, several downtown sports bars are partnering for a "Watch Party Passport" program that offers drink specials and prizes. The bars participating are The Dubliner, Flannery's, The Over/Under and Tigín. More info here.

The Post sports bar in Maplewood is another good option, but they're not participating in the passport program.

Meshuggah The Delmar Loop coffee shop is converting its upstairs into World Cup HQ with a 50-inch plasma-screen TV.

Owner Patrick says he's rooting for the U.S. and "anyone that's playing against England." He adds that in previous years "we've gotten Algerians that come in, some British folks, people from Ghana and we've always had a few Russians and a few people that are French nationals that come that live in St. Louis now."

You might spy an RFT staffer or two playing hooky as well.

Helen Fitzgerald's The bar is opening early at 8 a.m. on match days and offering a $4.99 breakfast special and a $5.99 omelet. They also boast a "giant-size" projector screen said to be the equivalent of "nine 46-inch TVs put together."

Next: International Pride...Group 3: We Are the World

Carniceria Latino Americana The Cherokee Street grocery store/restaurant has a sign painted on the side of the building that says "Mexico vive aquí." (Translation: Mexico lives here.) That goes double for the World Cup. The restaurant is partnering with nearby soccer shop Gooolll and offering food and drink specials for all Mexico and United States matches.

They're opening at 7 on Friday morning for the opening ceremonies, which will be followed at 9 a.m. by the opening game: Mexico vs. South Africa.

The standout breakfast special is "Huevos a la mexicana" -- scrambled eggs with salsa in the colors of the Mexican flag, made with green peppers, white onions and tomatoes.

Tam Tam African Restaurant It's the Dark Continent's moment in the spotlight, and if you want to get in the spirit with authentic African cuisine, check out Tam Tam in Florissant. Owner Kassim Kone hails from Senegal, but he says he's pulling for all the African teams in the Cup, particularly Ivory Coast, Ghana and Cameroon. They'll be open during regular business hours only. 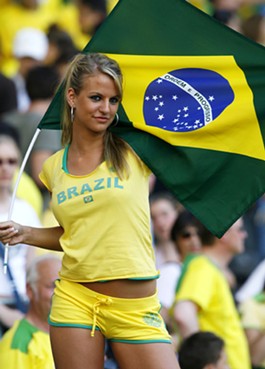 Yemanja Brasil and Coco Luoco Brasil Brazil has won the World Cup five times -- the most of any nation. Needless to say, their fans looooove them some soccer. Watch all the Brazil and USA matches at both restaurants, and enjoy a caipirinha and some churrasco while you're at it.

Coco Luoco is offering $5 buckets of beer and appetizer specials. Yemanja also has specials in the works, according to the owner.

Tip-Top Food & Sprits This Soulard establishment serves what is arguably the best bar food in St. Louis. Actually, calling it bar food is an understatement -- it's massive helpings of meat grilled to perfection. The establishment is owned and operated by Serbians, a nation that just so happens to be a dark-horse favorite to win the tough Group D in the opening round.

Owner George Korac is a passionate soccer fan, and he's opening the establishment early for all the Serbs' games. "I also root for Italy," he says. "I got a lot of Italian friends, so I root for their team and they root for mine. Unless they're playing each other -- then fuhgettabout it."

Guido's Pizzeria and Tapas. Spain is the favorite to win the World Cup this year and for good reason: they have some of the game's players including Xavi, Andres Iniesta, Fernando Torres and David Villa . Enjoy soccer Spanish-style at one of the Hill's finest eating establishments, the bar of which just so happens to be decorated with scarves from every club in Spain's La Liga.

Anthonino's Taverna. The unofficial headquarters for Greek and Italian fans. The bar isn't opening early, the owner says "unless Greece plays Italy, then we'll definitely be open for that." For the opening rounds, the bar is offering a beer bucket special of 5 domestic bottles for $12 "plus we have four TV's and really good food."

Other spots showing games during regular business hours are O'B Clark's, BARcelona, all Llywelyn's locations, the Fox and Hound Pub and Grille, The Red Lion and just about every sports bar with a satellite TV package.