No, Really, Escolar is the Shit(s) 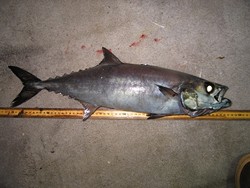 However, I do issue a parenthetical caution about escolar, in general:


Because of its high oil content, the fish has a reputation for causing, let's say, intestinal distress. It's generally agreed that trouble only begins brewing after about six ounces. Enjoy in moderation.

Well, we're not quite as polite at Gut Check International Headquarters as we are in print, so why don't we examine just what "intestinal distress" means.


A bycatch of tuna, escolar is often referred to as "white tuna" on sushi menus, as is the more common albacore. But the buttery fish is actually a kind of snake mackerel, a deep-sea bottom-feeder full of a wax ester that accounts for its dreamy velvety texture. Unfortunately, that oil is not digestible by humans and causes severe gastrointestinal distress in some people. It has earned escolar the nickname "Ex-Lax fish."

OK, OK. Let's be more precise. It causes a condition called keriorrhoea, which is lovingly described in this abstract of a scientifc article:


Lepidocybium flavobrunneum, a marine fish of the snake mackerel family, is sometimes sold under the category of 'butterfish'. Ingestion of this fish was observed to be followed by the passage of oil per rectum. The fish was found to contain 23% by weight of lipid and analysis of this, and of the oil passed per rectum, showed that it consisted of wax esters. The high proportion of wax esters in the flesh of the fish, their resistance to digestive enzymes, and their low melting point, result in pooling in the rectum of significant volumes of oil, the lubricant quality of which causes frequent calls to stool. The symptomatology is therefore quite characteristic, but with the quantities normally ingested the condition appears to be harmless, despite reports of toxic effects in experimental animals.

Escolar's potential for a shitty dining experience has caused it to be banned in seafood-crazed Japan, of all places. As I noted in the review, there seems to be a consensus that small portions (six ounces or less) reduce the chance of trouble. I choose my language carefully, though, because I haven't seen a scientific study proving this conclusively.