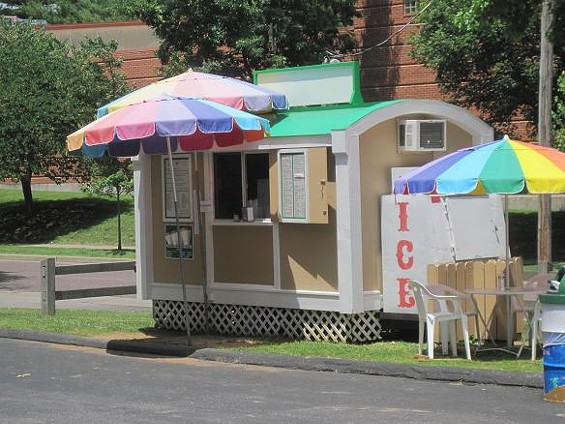 Greetings! Dr. Freeze here, lately returned on the red-eye bird from the 17th Annual International Conference on the Advancement of the Snow-Cone Arts in Davos, Switzerland -- just in time for the official start of snow-Cone season.

Yes, Memorial Day has come and gone (I pause to remember Dr. Freeze Sr., killed heroically while trying to air-drop a shipment of shaved ice on Omaha Beach -- unfortunately, it was 1964, the ice melted before anyone could find it, and my father ran out of fuel during the return flight and crashed his plane into the marshmallow-topping-white cliffs of Dover) and the rapscallions have been released from school, which means it's time to quench our existential thirst with a delicious snow-cone.

Won't you join me on a guided tour of the snow-cone stands of St. Louis?

Ah, Brentwood: I remember, in those heady days of his bachelorhood, after Maman left him for that herpetologist -- vengeance shall be mine, "Dr." Steeg --  when my father and I would commiserate over a pint of lager at Double D's until, perhaps, my father felt the stirrings of his deeper soul and manned the karaoke machine for a heartbreaking rendition of "Drop Kick Me, Jesus, Through the Goal Posts of Life."

But I digress. Southern Sno is a fine establishment, with shaded seating and even, past a grove of trees, a lovely little creek in which to cool off before enjoying a snow cone. Yes, yes, there are posted warnings against swimming in this creek because of the potential for sewage overflow, but I have bathed in the waters of the Ganges at Varanasi, so Brentwood does not scare me.

Southern Sno belongs to the finely crushed ice school of snow-cone preparation. Though not my personal preference --  I prefer my ice, as I do many things in life, finely shaved -- ever since I had to intervene in a scrum between George Soros and Lech Walesa at the 14th Annual International Conference on the Advancement of the Snow-Cone Arts in Davos, Switzerland, I have taken an ecumenical approach to the great debate.

For my flavor, I chose sour apple. Oh! how Southern Sno disappointed me here. When I order a sour apple snow cone, my face should pucker like a grandmother preparing to bestow a birthday smooch. Instead, I tasted a fruity sweetness as fleeting as my dear friend George Lazenby's regrettable spell as James Bond.

Fortunately, it was at that very moment that I heard the the voice of (shivering, as I suddenly was, might I have felt his spectral presence, too?) my late father: "Remember, son, no matter how disappointing the flavor of your snow cone, you will always have brain freeze."