Horseradish: The Root Behind Collinsville's Festival

This weekend the Illinois Horseradish Growers Association will celebrate the people and the land that produce 60 percent of the world's horseradish in Collinsville, Illinois. The annual International Horseradish Festival features all the usual festival fun, with a spicy kick from the town's favorite native root. 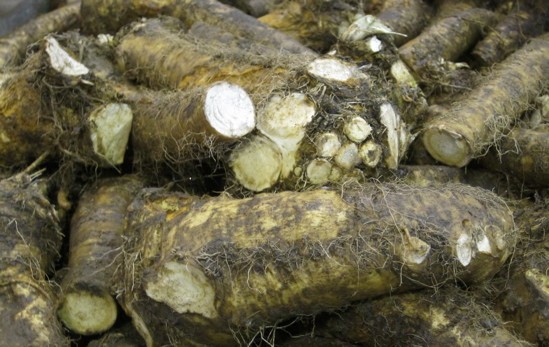 But what are we celebrating, really?

"We're not a processing facility. We're strictly a distributor," she explains, seated in a conference room nestled among horseradish fields with a view of the Gateway Arch. The air in the building that houses the country's largest horseradish distributor has just enough punch to clear sinuses. "We purchase from local growers, and then we distribute to processing companies and also produce distributors who put it into grocery stores."

About a dozen Collinsville-area farmers grow horseradish. Over centuries the Mississippi River created a rich blend of nutrients in the soil surrounding Collinsville that's perfect for horseradish cultivation.

Ten million to twelve million tons of horseradish pass through the J.R. Kelly facility each year, and trucks carrying palletsful of roots are a common sight on Highway 157 during harvest, from October through late April.

"It's kind of late in the season to be taking in product, but this year was really bad weather-wise for them, so it delayed things," Robertson says, explaining why truck has just arrived. "We'd usually be done by now, but they're still finishing things."

Just off the office and conference room, three workers stand at a conveyor belt. Boxes holding 800 to 1,000 pounds of horseradish, straight from the farms, empty onto the belt. The workers trim ends and leaves from the roots and send them down the line to a washing machine. Uncut horseradish is mostly odorless, but as the workers cut the roots, the smell, fresh and pungent, hangs in the open-air warehouse. It's not an overpowering aroma. It's felt in the eyes more than it's smelled.

Robertson doesn't notice it any more, except when an extra-strong batch is trimmed. Once, a batch of roots had been frozen and then thawed, causing what she calls an "enzymatic storm" of fumes.

With a loose dirt removed, the roots are ready to go to their new owners -- produce-distribution companies that sell the whole roots to grocery stores and, more commonly, to the far-flung companies that make sauce and other horseradish-tinged products. Which is why the jar of horseradish sauce in your fridge makes no mention of having originated in southern Illinois.

There's a medicinal demand for horseradish, as well. It has long been used as a folk remedy for headaches, but molecular biologists have increasingly used the enzyme horseradish peroxidase to detect antibodies. When researchers need horseradish, they call Collinsville. "That fluctuates," Robertson says. "When they need it, they need it, and when they don't, they don't."

In a welcome change to this year's horseradish festival, all food vendors are required to offer at least one dish that prominently features the root.

Workaday exposure to the product hasn't worn thin on Robertson. "I love cocktail sauce," she says. "I didn't used to eat it before I came here, but I do now."