This is part two of Robin Wheeler's Chef's Choice interview with Christopher Lee of Cafe Ventana, Sanctuaria, and Chuy Arzola's. To read part one, click here. Part three, a recipe from Chef Lee, is here.

Did your family cook when you were a child? If so, what meals stand out? Yes, both my mom and dad cooked. For my mom, her salmon patties. She and I were the only ones that ate them. Dad, stir fry and black gumbo.

How old were you when you started cooking? Off the books, ten or twelve. I say off the books because I managed to melt a Tupperware cup in the microwave trying to melt chocolate chips to make chocolate milk.

What was your first kitchen job? Dishwasher at Ponderosa.

Did you attend culinary school or college? Hard knocks! Apprenticed under the late Jean Claude Guillossou and Cafe de France's Marcel Keraval, both old-school French, both masters in their own right and both dedicated to technique and consistency.

What do you eat? Crow as little as possible.

What do you cook at home? Usually Sandra (my wife) and I eat fish and vegetables. Breakfast is a big deal in our house, also. 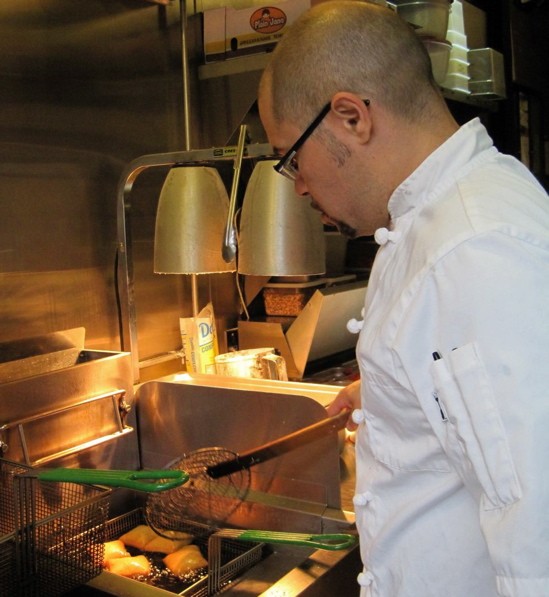 Three favorite restaurants in St. Louis, besides yours? Harvest, LuLu and Carl's Drive In.

Most essential ingredient in your kitchen? Fresh herbs.

Favorite local ingredient and where you get it? Vegetables from Andy Ayers or my garden.

One food you dislike. I am not too keen on stew.

One food you can't live without. Whatchamacallits.

What's the first rule for your kitchen staff? CLEANLINESS!!!

What ingredient will never be allowed in your kitchen? Bad or spoiled. The rest is fair game.

Culinarily speaking, St. Louis has the best _______. Place to define a "new" cuisine. We are in the middle of the U.S. We have some of the most talented chefs in the country working here. We have access to so much. I think with time and cultivation, St. Louis could become one of the top restaurant towns in the country.

Culinarily speaking, St. Louis has the worst _______. I feel a few St. Louisans forget that there are people with hearts and souls who work in restaurants and yeah, sometimes things don't go your way. I know I have had my fair share of "Really?" moments at local restaurants. I do realize that we all have our days, and though we in the industry try our best to provide perfection, sometimes it eludes us and the only thing that we can do or ask is to allow us the chance to make it right. Blogging and Yelping how awful things are at a particular place isn't constructive or fair.

Culinarily speaking, St. Louis needs more _______. People thinking local. We have a great city. I love St. Louis. There are a lot of great people here. I love to hear the "local guy makes good" or "group adds to the community" stories.

Your best tip for home cooks? Recipes are a guideline, not the law. Have fun.

One person, dead or alive, you'd love to cook for? My mentor and friend J.C. Guillossou. He passed before it finally all sank in.

What's next for you? At least two or three more restaurants this year, and who knows?

What inspires you? God, and the people I meet from day to day.

Chefs who inspire you? Josh Galliano, Steve Gontram, Justin Leszcz -- a lot of the local chefs. I have a few hundred cookbooks at home, but for the most part I think there is a pretty big movement here that feeds me, inspirationally.

Favorite cookbooks? All of the Nobu cookbooks, the Larousse, and my collection of pre-World War II cookbooks.

Proudest professional moment? Seeing people truly inspired and amazed at something they have had at one of our restaurants and sharing it with us. The "I didn't think I liked lamb," or "I hate mushrooms but these are amazing!" It's an honor to be a part of that.

Favorite music to have in the kitchen? The sounds of silence.

What's on your pizza? Sausage and mushrooms.

What's in your omelet? Bacon, asparagus and Gruyère.

What are you drinking? Water or iced tea. Wasn't that invented in St. Louis by Richard Blechynden?

What's the best request you've gotten from a customer? Waffles on a busy night in a four-star, four-diamond hotel that doesn't normally serve waffles. I did make them. That one still sticks out.

Most difficult lesson you've learned in this business? That I am not all that! Humility is the key to mastery, I think. How can you possibly move forward and gain more knowledge about this business if you think and act like you already know everything? I am only as important as the people surrounding me allow me to be. Self-importance is not the heart of the service industry. In my opinion, being gracious is.

When did you know for sure that the chef's life was for you? My second day at Ponderosa, when I saw the cooks working the broiler. I am not sure they do it now, but then the broiler was on a grill that had a big wheel that raised and lowered it. Fire shot out of the thing and two guys had to work it. It was surreal to watch.