This is part one of Robin Wheeler's Chef's Choice interview with Christopher Lee of Cafe Ventana, Sanctuaria and Chuy Arzola's. To read part two, click here. Part three, a recipe from Chef Lee, is here. 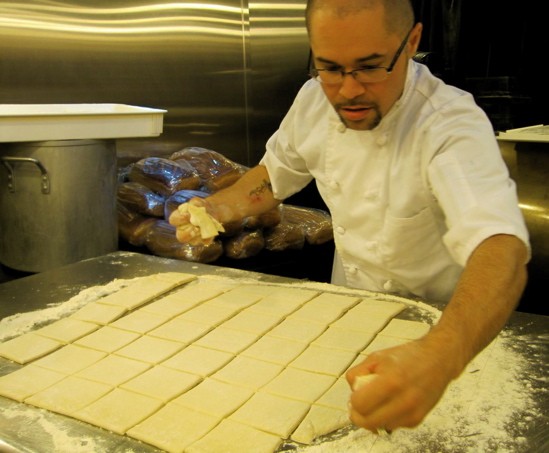 Before Christopher Lee took the reins as executive chef for Cafe Ventana, Sanctuaria and Chuy Arzola's, he found himself a bit fed up.

"In the beginning of your career, you're so consumed with it. You eat, drink, sleep to the point where -- I remember one year for Christmas I was like, 'I don't want any more food-related stuff. I want, like, Scrabble and a trash compactor.'"

As he nears a quarter-century in the food industry, Lee has moved beyond the burnout stage by moving up.

Starting as a dishwasher at Ponderosa Steakhouse and doing the required high school stint at McDonald's, Lee moved on to Caleco's. He wanted to cook but instead was put to work as a dishwasher required to do major deep cleaning in the kitchen. "It really instilled in me attention to detail," Lee says. "Yeah, you may be a good cook, but if you've got a filthy kitchen.... You're only as good as the cleanliness of your kitchen and your surroundings. So I went into the navy and learned all about attention to detail in great depth."

Post-navy, Lee returned to washing dishes at Caleco's. Within a year he was managing the mini-chain's outpost at Verizon's Wireless Amphitheater before moving up to the regimented world of French cuisine.

Seated at the bar next to the coffee urns at the impeccably turned-out Cafe Ventana, Lee chooses his words, pausing thoughtfully to mull what he's going to say before saying it. It's a discipline borne from seven years of working in the local French restaurant kitchens of Jean Claude Guillossou (L'Auberge Bretonne) and Marcel Keraval (Cafe de France) that colors his ability to manage three restaurants.

"I was told from day one that we play French baseball: three strikes, you go home. I still believe in that. We have to get things done. We have to get them done in a timely manner. At the end of the day I still know that it's my reputation at stake, and not some twenty-year-old dude who's ICP-ing it up or whatever he does in his spare time."

It's a lesson Lee learned firsthand. Seven years in French kitchens left him so exhausted that he left the industry and spent two years installing cable television. "I had a lot more money than I'd ever had. I had a lot more freedom," he says. "And I hated it. It wasn't me."

So he returned. Chase Park Plaza, Kirk's American Bistro, and Melange -- a venture with his father and stepmother -- where the effects of the chef lifestyle hit. "My hip would start giving out on me. I'd get on the line and I'd just fall down. It wouldn't support any weight. I had avascular necrosis, which was brought on by years of binge drinking.

"I grew up in kitchens in the '80s. After work I could drink a bottle of beer in a couple of seconds, and it was encouraged. Back in those days we were like pirates. I worked with a lot of criminals, drug addicts, drunks, you name it. I was told from day one that you work hard and play harder, and we usually played harder than we worked. And we worked pretty hard."

He stops again to choose his words. "I think that was one of those defining moments, when that came about. A lot of shit had to stop. I wasn't progressing anymore; I was going back downhill.

"It was really hard and there was a lot of difficulty, but I'm coming out on the other side of it. It still bothers me from time to time. I'm not allowed to bungee jump or parachute, which kills me. I usually think twice about doing a lot of things. I've always mountain biked, snowboarded, skateboarded, all those things. Now I think I want to back off a little bit.

"But at the same time, I haven't drank or done any drugs in four and a half years. I operate three restaurants. I have a house, I got married. I can look at it as a minus, but there are so many pluses on the other side, for sure."

Experience has allowed Lee the opportunity to step away from the brutality of the business and focus on restaurant success with Dr. Gurpreet Padda, who owns the restaurants Lee oversees. "More than anything, it's about all these guys." Lee waves toward the bustling staff behind the counter. "I'm not here every day. I can't be here every day. They all do a hell of a job. At Chuy's and Sanctuaria, it's the same thing. There's a lot of reliance on those guys to carry the torch. If they need anything, they can just call me and I can fill in the blanks from there."

But does he miss the rush of being on the line? "Honestly, I love cooking. To actually bake any more of my mind and stand on that line for eight hours and go through someone yelling at me to put up food? Yeah, I'm pretty much good on that. Becoming a Chef really talks about the guys who go through the brigade system. By the time they make it to sous chef they're so burnt out and tired they don't want to cook anymore. I laugh because at that time I didn't really want to cook anymore. And I didn't. I worked installing cable for two years. I still love it, though. I wouldn't have it any other way."

Now that family and friends have gained priority, Lee's perspective on chefs has changed. "I think people put so much stock in chefs and cooks -- what they're interpretation is, what they should be, but at the end of the day we cook food for a living. And everyone eats. To put that much energy and responsibility on somebody, I don't think it's unfair, but I think it's kind of lopsided.

"I think a lot of people get caught up in the stardom factor of it and forget that this is the service industry. It's not about me. It's about the people who come in and eat."