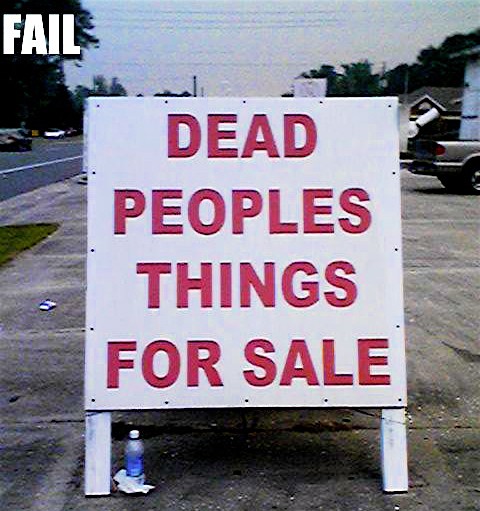 We land at the Macklind Avenue Deli after a long morning of digging for sweet deals at estate sales. It's a favorite summertime Saturday morning ritual and we were happy to get back to it on this first truly hot day. By the time we went looking for lunch, we were sweaty, tired and smelling faintly of musty basement, with a backseat full of unlikely treasure.

Yard sales are a waste of time -- it's just the crap people don't want any more. Estate sales are full of the crap people wanted to keep. Plus, we will admit to a bit of a perverse fascination with walking through someone else's house, just as it was when they were living there, and poking through their things. It's like an anthropological dig, like time travel.

The finished basements are the best. There's always a bar -- a black leather bar with tall, swiveling chairs, or a tiki bar with bamboo stools, ancient bottles of booze, Kiwanis Club coasters, cordial glasses and giant ceramic ashtrays. We are scavengers, though, not merely observers, tipping off our cohort, "I saw records in the basement."

The hunt is punctuated by moments of unsettling intimacy. You pick up some seemingly innocuous object, and it tells you about its owner; suddenly you understand something about the way they lived. Jar upon jar of Estée Lauder face cream in one woman's bathroom said she was beautiful at one time, and that she never let it go.

In a dumpy two-bedroom in south city we stumbled upon a perfectly preserved 1970s stoner kid bedroom: wood paneling, twin bed, Hot Wheels scattered throughout, a custom-van-and-muscle-car collage from torn-out magazine pages on the closet door, and a spot-on 8-track collection; America, Foreigner, Journey, Kansas, Bob Seger, to name a few. Aside from this time capsule, it was obviously the home of an old man. This room spoke of loss -- a tragic accident, maybe a runaway.

This kind of nostalgia for a time when life was good is a common theme at estate sales. Sometimes it seems as if the occupants sopped living there after a particularly rollicking cocktail party in 1974 -- the records, the clothes, the décor -- they show almost no evidence of the years that came after. Macklind Avenue Deli is nostalgic in a certain way, too. Not because it strikes you as outwardly retro, but because it is a neighborhood deli in the best tradition.

It's located, not in a strip mall or on a busy thoroughfare, but embedded in a residential neighborhood, at the corner of Macklind and Nottingham. The owner is often behind the cash register, and baby-faced teens, for whom this is surely a first job, assemble the sandwiches. Their astounding selection of bottled beer, by the six-pack or mix-and-match singles, is available to take home or enjoy on-site. As much as we would love to grab a bucket of beer (buy six, get one free) and join the many smiling patrons on the patio, our afternoon plans demand sobriety, so we take our butcher paper-wrapped sandwich and Boylan's Creamy Red Birch Beer to go.

Boylan Bottling Company, too, is a throwback. Founded in 1891, it's still sweetening sodas with real sugar and selling them in heavy glass bottles. The Original Birch Beer, the company's flagship product, is based on a recipe for an "elixir" developed by pharmacist William Boylan more than a hundred years ago. Birch oil has a strong, minty quality that's softened in the Creamy Red version by the addition of vanilla. Its flavor is not unlike root beer, but more distinctive. A scoop of vanilla ice cream transforms it into wickedly good float, which is just the thing if you're feeling nostalgic on a sunny summer afternoon.