A Movable Cocktail Feast: Manifesto Drops in from KC for Two Nights Only

What do you do when your bar's no longer permitted to serve alcohol?

For two partners behind Manifesto in Kansas City, the answer was easy: You go mobile.

Manifesto opened in April of last year to praise and positive press. But in March the restaurant that leased the bar its speakeasy-style space (and held the property's liquor license) folded, leaving the bar in the lurch. 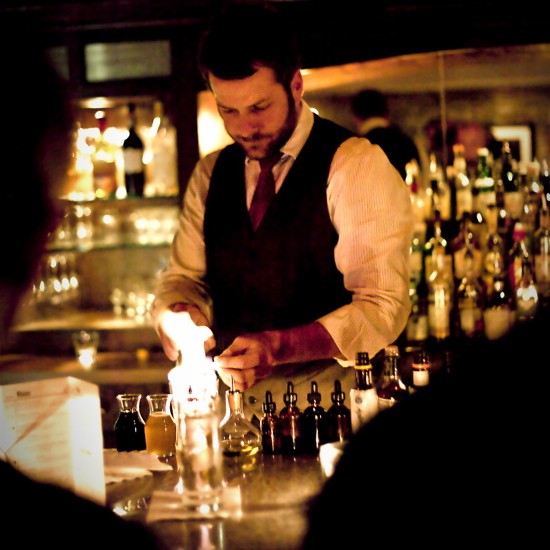 So owner Ryan Maybee and bartender Beau Williams took their show on the road, with a series of guest-bartending appearances at other eateries. They've been making the rounds of a diverse array of venues in the Kansas City area, standing in at the Screenland Armour Movie Theather, at swank Pierpont's at Union Station, at the upscale burger joint BRGR across the state line in Kansas and at the nationally lauded Justus Drugstore in tiny Smithville.

And this weekend they'll be in St. Louis -- at Pi in the Central West End on Sunday, and at Eclipse in the Delmar Loop on Monday.

Gut Check caught up with Maybee as he waited to board a flight to New York for the first annual Manhattan Cocktail Classic, a mixologists' continuing-education conference.

Maybee says he aims for his Traveling Cocktail Club to "promote craft cocktails, a culinary approach and highlight other bars that are taking that approach."

What should patrons expect? Look for lots of fresh-squeezed juices, liquors made in-house, and custom-tailored cocktails.

Four Manifesto cocktails will be offered at Pi on Sunday, including the Beautiful Red Bell, a gin drink made with red bell pepper and mint; and the Tempest, a variation on the classic Dark and Stormy made with Gosling's Dark Rum, lime juice, ginger syrup and an eyedropperful of five pepper-infused tequila.

The party starts at 7 on both nights.