If Drink of the Week were a food, we'd be a soft, crumbly, stinky blue cheese. We'd be made from the rich, verdant milk of sheep that grazed in sunny meadows, unpasteurized (we're worth the risk), aged to perfection in a musky, dank French cave, salty, pungent, delicious. But not for everybody.

We're what you'd call an acquired taste. As such, we have an appreciation for those things (and people) that don't necessarily have mass appeal. Pickled beets. Raw oysters. Dark-roast coffee. Our dining companion prefers deep-fried livers and gizzards, tacos de lengua and black jelly beans.

Tom Coghill, self-described Proprietor and Curmudgeon at Large of Iron Barley, seems to see things our way. He has built a restaurant and a menu that evinces his gruff personality -- a little bit south-side hoosier, a little bit gourmand, a little bit outlaw.

We think the highbrow-meets-lowbrow food is great and Iron Barley's rough-around-the-edges atmosphere is as comfortable as an old T-shirt. You may agree with us, but you may not. The framed, signed headshot of the Soup Nazi (of Seinfeld fame) watching sternly from over the bar isn't just another piece of quirky décor - he's letting everyone know where this joint is coming from. Like what they're doing? Great. Behave yourself and you're welcome to stay. Don't like it? That's fine too -- be sure not to let the door hit you in the ass on the way out. 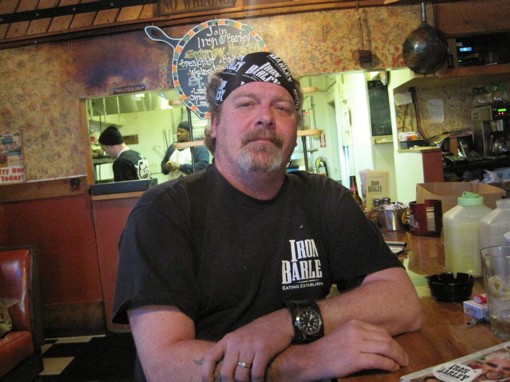 It's no coincidence that the restaurant's namesake grain is a key ingredient in beer and whiskey production. There is a clear emphasis on craft beer, with several local and some harder-to-find options both on Iron Barley's draft list and on the restaurant's extensive by-the-bottle selection. We are drinking New Belgium's relatively new Ranger IPA.

India pale ales are distinguished by their hoppiness. Whereas barley, in the form of malt, adds sweetness to the flavor of beer, hops contribute a bitter flavor that balances that sweetness. Or, in the case of the Ranger IPA, obliterates it entirely. It's a hop bomb that weighs in at 70 on the International Bitterness Units Scale.

Which is to say: bitter.

Bitter is the redheaded stepchild of the tastes. Her triplet sisters Sweet, Salty and Sour are fair and fetching, always led by Sweet, batting her eyelashes, getting voted most popular. But, as in life, as our tastes mature Bitter's charms become more apparent. We start to find Sweet a little cloying, kind of one-dimensional. A hoppy beer is dry and refreshing on a hot day in a way that a sweeter beverage never could be.

Still, it takes all kinds. If you're looking for something sweet and fruity, and Darren is behind the bar, ask for a Cherry-Lime Fizz. Made with house-infused sour cherry vodka, fresh lime, simple syrup and topped off with Sprite, it's perfect for sipping on Iron Barley's (recently opened) patio.

Even if you could, if you had to give up everything that makes you distinctive and interesting in the process, what would be the point? Who wants to be blandly likable? If that's what you're after, there's a place "in the neighborhood" that will suit you just fine, because they're designed to suit everyone. Just fine.

If not, head on down to Iron Barley this month and help 'em celebrate their anniversary -- seven years of being uniquely, unapologetically, exactly who they are.

Iron Barley celebrates its seventh anniversary on Sunday, May 16, from 2 till 7 p.m. on its patio. There'll be food, drink and live music all day. Admission is free with a donation of canned goods the St. Louis Food Bank.