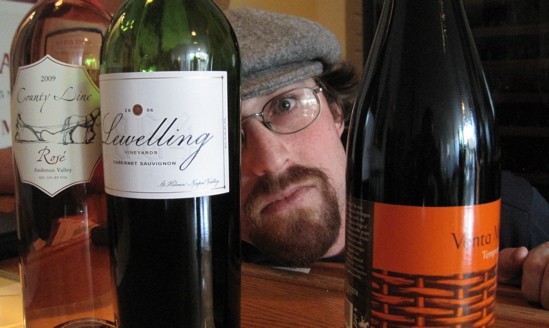 It's not a traditional shopping experience, and it's all the better for it. Instead of the usual aisle-strolling among the case stacks, you pull up a chair, order a glass (or a bottle), read through the list of offerings and engage in an actual conversation about wine with owner Jeff Stettner or his knowledgeable long-time employees, Dylan Mosley and Mike Bianco. They'll assemble your order from 33's temperature-controlled cellars.

A truly civilized way to shop.

Today Stettner picks three of his favorites from the list. First up: Stettner's Value Pick...

Inexpensive Spanish wines have been the rage for the past few years, but the vast majority of these are based on grenache -- a grape that tends to great ripeness and jamminess -- to that point that many of these wines are hard to distinguish from one another. Stetter's selection, though, is based on tempranillo, the grape that made Spain's Rioja region famous. The last vintage was the first he'd stocked, and he was impressed that it was "really solid" and a great value. "We didn't buy enough last year at all -- it went really quickly," he laments.

So he stocked up this year and thinks this edition might be even better than the '08.

Never one to take another drinker's word when there's a bottle in front of us, Gut Check popped the cork on one. It reveals itself in the deep, impenetrable purple that has come to characterize Spanish value reds. This one smells like concentrated grape juice, with the ripeness masking most of tempranillo's distinctive characteristics. With time in the glass, though, a hint of the grape's leathery earthiness glimmers through. The flavor isn't as fruit-heavy as it threatens to be, and it's bolstered by a backbone of nice chalky tannins. It would make a fine companion to pulled pork, or a plate of salami and cheese at 33.

Gut Check loves a good rosé, especially as we head into picnic season. This one is different from most you'll find, as it's made entirely from pinot noir by the expert hand of boutique pinot noir master Eric Sussman of Radio-Coteau.

Stettner says Sussman treats the wine seriously, with "whole-cluster pressing to give a bit of structure" and aging in old oak to create a lovely texture without the oak flavors. He had a bottle open to pour by the glass, and kindly gave Gut Check a taste.

The wine is lively with electric acidity and the flavor of fresh ripe strawberries. This one screams out for ham, or cold fried chicken on a warm day.

Stettner cut his wine teeth on top-flight Napa Valley cabernets, and his ardor hasn't cooled. "I loved the '01 and '02 vintages of this wine," he says, explaining that he'd picked them up for his personal cellar from this tiny producer (fewer than 1,500 cases total) near St. Helena. When the winery made a bit available in Missouri this year, Stettner says, "I grabbed what I could."

OK, it's not cheap, but it's not expensive when compared to its peers, and Stettner has a point when he says it "offers a great value for high-end Napa cabernet."

It just so happened that Stettner had a bottle open, which, as far as Gut Check was concerned, offered the greatest possible value. This is indeed a truly elegant Napa cabernet: plenty of oak, coupled with a rich but not overpowering plumminess. If you're feeling even splurgier, Stettner has a small stash of Lewelling's cabernet from the Wight vineyard ($80). "It's a real treat," he promises.