This is part one of Robin Wheeler's Chef's Choice interview with Eliott Harris of Miso on Meramec. For part two, a Q&A, click here. Part three, a recipe from Chef Harris, is accessible here.

How does a guy with a name like Eliott Harris wind up working as an executive sushi chef at a place like Miso on Meramec?

Through a longtime love of sushi, a lot of hard work peppered with some humiliation and a willingness to throw himself into the world of Japanese cuisine's most competitive American markets.

"Sushi was always something I loved as a kid. I was introduced to it when I was thirteen in Cleveland, Ohio, of all places, and it was kind of like comfort food for me," Harris says of his baptism-by-sushi 25 years ago. "Back then everyone's like, 'Oh, sushi's a fad. It'll never be around,' and now it's all over the place."

Harris moved a lot as a kid and found himself in St. Louis in time for college at Saint Louis University. During that time his father co-owned a deli, where Harris got his first taste of the restaurant business. From there he worked at a Grateful Dead-themed bar, where he met Jim Voss of Duff's. Voss gave him a prep-cook job while Harris plotted out a post-SLU course in food.

"In the early to mid-'90s, culinary schools weren't as huge. People were like, 'What are you doing after undergrad?' I'd say I was thinking of culinary school and they're like, 'What is that?' That term wasn't even around. Shortly after that, with Food Network, it became the cool thing to do.

"The cuisine I really liked was Cajun and Creole. Big, bold flavors. That was the path I was thinking. I always had sushi in the back of my mind, but I never thought that, being white, I'd ever be able to do it.

"My first job behind a sushi bar was at the Hyatt in Beaver Creek. A buddy of mine was running the sushi program. He'd been doing it for five years or so. We'd run into each other at bars. I was the exec chef at a microbrewery. It was high volume -- rotisserie chicken, 500 burgers a day at lunch. It was not my deal at all. He said he was looking for someone and hired me. He was impressed with my eagerness to learn. When Sato opened, they recruited him to help with the opening and he convinced them we were a package deal, that they had to bring me onboard."

"I trained under a really old-school guy [Yoshi]. I basically kept my mouth shut and did what I was told. For months and months and months. The first three or four months, all I did was make rice, then I'd give the little wood board with ginger and wasabi to guests. I'd make limited rolls, but he'd cut and plate the rolls. It was a hate-hate relationship, pretty much.

"He had a guy [Ted-san] he trained, a Japanese guy who had fifteen or twenty years on me and spoke limited English. Ted-san was my boss, so if he wanted to communicate with me, he'd tell Yoshi and Yoshi would tell me, but I'd have to tell Yoshi and Yoshi would have to tell him. That's just how it was, and it was pretty humiliating. If there was one too many grains of rice on a roll, he'd flick it at me and yell at me with a bar full of customers.

"I basically took his shit for six, eight months. He knew I wasn't going anywhere. And then we became really good friends."

"I started filling out some résumés on the west coast. I got a job offer in San Francisco -- basically packed up all my stuff and moved. I wanted to put myself in the most competitive market. I had a really comfortable lifestyle. I moved to San Francisco with a U-Haul and that was it. I figured as soon as I got behind a sushi bar, I could start networking. It definitely made me a much better sushi chef. Every day I was like, "What am I doing?'" 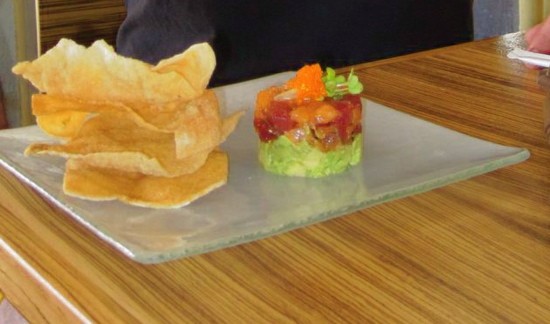 While in San Francisco, Harris met his future wife. With subsequent moves -- to Miami and to the Dominican Republic -- Harris helped open new sushi joints. It was during his time in Miami that he found the tables from a decade earlier had turned.

"When I opened Abokado in Miami, Ted-san was looking for a job, so he moved from Colorado and worked for me ten years later. It was full circle. He was a good guy. That's how you learn, from working in that environment."

Two years ago the impending arrival of their twins, Fisher and Clover, led Harris and his wife back to St. Louis after a nationwide search. He answered an ad from Miso's owner, Brad Baracha, who knew Harris' work from vacations in Vail. Harris found the city of his youth to be a good fit for his growing family.

"I never thought in a million years I'd wind up back in St. Louis, but it's been a good year. All the places I was looking at living all had certain attributes that were important to me, but it seemed like St. Louis had everything all wrapped up in one. Leaving when I was in my early twenties, I didn't have an appreciation for that, but it's been great. It's an easy place to live. It's got the Midwestern mentality; people are just nice."