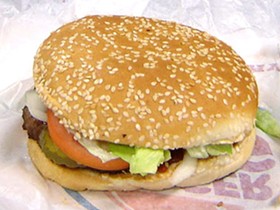 When Hardee's introduced a 1,000-calorie version of its biscuits and gravy with sausage and egg, it wasn't that shocking. That's what Hardee's does. When KFC announced its fried-chicken-as-bun Double Down sandwich, we all gasped in shock, but the result was oddly meager.

No, for true WTF? mastery, we must turn to the homely, fat-ankled perpetual maid of honor of American fast food, Burger King.

Case in point: CNN reports that Burger King is testing out a new brunch menu.

The article cites Sex & The City as evidence of the popularity of brunch -- which doesn't date the article at all -- but it's pretty clear that Burger King execs have never seen that show or, possibly, eaten an actual brunch.


The menu is set to feature a breakfast sandwich of eggs, cheese, tomato, ham, bacon and smoky tomato sauce served on Ciabatta bread, Whoppers (which are not usually available in the morning) and the BK Mimosa -- a nonalcoholic version of the classic cocktail with Sprite standing in for the traditional champagne.

What's remarkable is that the idea of a Mimosa made with Sprite instead of Champagne is so ridiculous that at first I didn't even notice that Burger King thinks its Whopper would make good brunch fare.

The article goes on to mention several "menu extensions" -- like hair extensions, but even more noticeable -- that have failed, including Wendy's taco bar and the infamous McDonald's Arch Deluxe.

However, I'm most reminded of something Burger King itself tried in (I think) the early 1990s. I don't know if this was a nationwide promotion or if Baltimore, where I grew up, happened to be the pilot program, but for a few months Burger King offered table service for dinner.

It was kind of a forerunner of the fast-casual model: You ordered at the counter, as always, then received a number and then some poor pimply employee was pulled off French fry duty to deliver your meal on a tray. If I recall correctly, the menu was ever so slightly expanded in an attempt to add a touch of class: fried shrimp, maybe, and a steak sandwich.

As you might imagine -- or perhaps remember yourself -- the effort didn't last long, as Burger King learned what it has apparently forgotten: People who want fast food...want fast food.

Or maybe I'm wrong, and it will be a huge success, in which case we can look forward to McBrunch and Hardee's 1,500-calorie Bloody Mary Milkshake.