I Stand Corrected: This Could Redeem Dunkin' Donuts Coffee 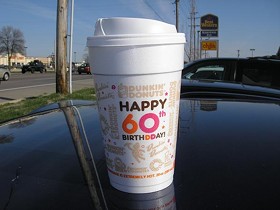 Last month, prompted by the hysteria surrounding the return of Dunkin' Donuts to St. Louis, I ventured to the new location to try the supposedly awesome coffee. My verdict? Dunkin' Donuts coffee is irredeemable swill.

I was wrong. An article in yesterday's Wall Street Journal suggests that Dunkin' Donuts coffee just might be redeemable. The article concerns Dunkin' Donuts return to the Russian market after an absence of several years. (Sound familiar?)

But why did the chain leave Russia in the first place?


The planned store openings come 11 years after Dunkin' Donuts pulled out of Russia, following three years of losses exacerbated by a rogue franchisee who sold liquor and meat pies alongside coffee and crullers.

Let me just say: If I could walk into Dunkin' Donuts and purchase coffee spiked with booze and a Russian meat pie, I would take back all the nasty things I said about the coffee.