At last night's "Rock The Tot" contest inside Bar Louie (14 Maryland Plaza) in the Central West End, hungry competitors stuffed their collective faces with 68 pounds of that snack-food staple, Tater Tots. It was disgustingly awesome, and a Wash U. medical student again took home the junk-food eating title. Seventeen competitors each had four pounds of Tots in front of them and six minutes to eat as much as possible. Each eater appeared equally ready to massacre some Tots, but the early favorite was Carl Deselm, a Washington University medical student.

Deselm has won the title inside Bar Louie two years running, and was named the national champ in 2008, a title that not even Napoleon Dynamite can claim.

Before the eating commenced, Deselm said he was a little nervous, but eager to get started. He brought a cheering section with him, with about a dozen people shouting his name and providing him with words of encouragement.


Competitors drenched the fried bits of potato in all sorts of liquids and condiments. Tots are used to Ketchup, but the more experienced among the competitors took it to the next level. Carl "The Champ" Deselm drenched his Tots with water, pouring a big glass over his first one-pound basket before smashing them in his hand.

Another competitor, Josh Katz, dipped his Tots into a glass of water before forcing them in his mouth. The "civilized" competitors enjoyed Tots the way they were meant to be eaten, with a little bit of salt and ketchup. But it also appeared that these competitors were not really trying to win. Some finished the competition with a majority of their first basket still in tact. Tots don't like getting abused, but they also don't like being wasted. In the end, the brutes persevered. It seems that drenching Tots in water and smashing them in your hand really is the best way to get them down quickly. The crowd of about 50 onlookers erupted in cheers as the winner was announced. Deselm had done it again. 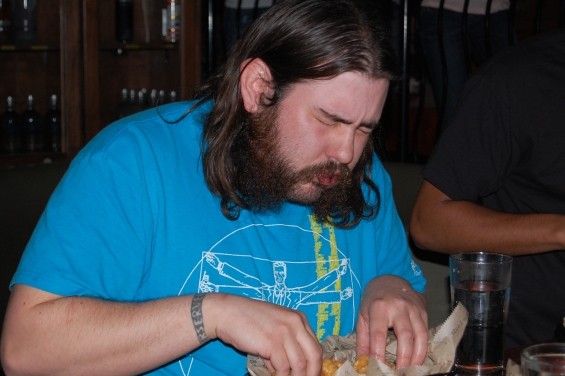 After devouring three pounds, five ounces of Tots in six minutes, Deselm won the $250 gift certificate and the pride that comes with being able to walk away with the champion's belt.

The ladies champion was Megan Maupin, who managed to down a pound, five ounces.

The national champion won't be announced for about a week or so. Bar Louie employees around the country are still busy gathering the body counts.

Bar Louie is a national chain with over 52 locations, and each holds the contest on the same day. Totals from all "Rock The Tot" competitions are compared to determine who wins the national title.