The Dive Bomber Gets Rocked at Rockin' Gators Bar & Grill 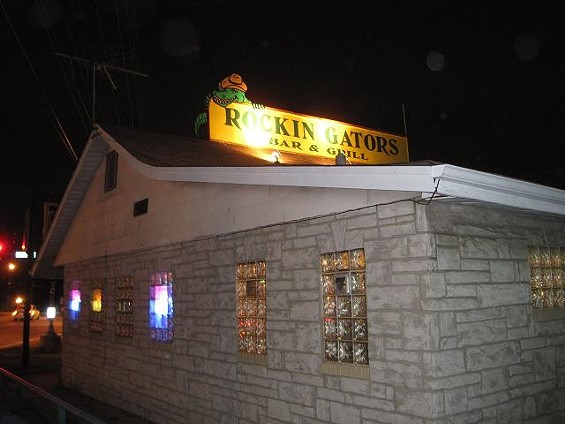 There are three customers at Rockin' Gators Bar & Grill, not counting the inflatable alligator that hangs from the ceiling. The Cardinals game plays with the sound off in a bar that's silent -- save for one patron loudly talking bugs. She's named one of them Fucker. At least, that's what she calls him.

"It's normally not so quiet," the bartender says.

The bugs in question aren't at the bar. They're in someone's house. While the bar's clean enough to discourage bugs, it doesn't seem like the type of place where one would order sushi. It's available, though.

The woman also seems to have either a dog or cat she calls Fucker, mostly because it recently crapped on the floor. "But it wasn't soft. It was hard, like it had been there for awhile. But I know it wasn't there when I left the room so I know little Fucker had to have done it. But it was hard!"

Sushi really doesn't sound appetizing at all. But the following menu item -- a tub of five cans of beer and a free coozie -- might go down nicely at this point.

"Hey, Joann. Turn it up!" the man sitting next to Fucker's owner says to the bartender. He gets up and walks to the jukebox. Joann the bartender complies.

"What the hell is this shit?" Fucker's owner screams over the blaring music when Miley gives way to Merle Haggard's "Think I'll Just Stay Here and Drink".

This shit is what's supposed to play in a bar, as opposed to what's played at a junior high dance.

Joann the bartender resembles Penelope, the lying, one-upping Saturday Night Live character, with a quiet drawling voice that trails off at the end of her sentences. Except she doesn't show any signs of hubris or dishonesty. She chats at length, asking questions and offering the latest on her 16-year-old son and his new car. She doesn't twirl her hair, though.

"It's really not usually this quiet," she says. "There's usually more people here. I usually work on Saturdays."

She drops the last word from each sentence.