This is Part One of Robin Wheeler's Chef's Choice interview with Jarvis Putnam of Bossanova Restaurant & Martini Lounge. Part Two is here, Part Three can be found here.

Think of food in Alton, Illinois, and sometimes it's hard to get past great pie and cheap meat on a stick. Jarvis Putnam of Bossanova Restaurant & Martini Lounge (112 West Third, Alton; 618-462-1175) has spent nearly five years making a place for fresh, flavorful modern fare in the river town.

It's been a gradual process, evolving from a martini lounge into a dining destination. With a long stint working at Chris McD's, a bar and grill in his native Columbia, Missouri, Putnam is equipped for elevating bar food to something more. "What started out as a quest for better bar food has turned into a full-blown restaurant. It's been really great and people have been really appreciative of what we're doing.

"It was us and Tony's doing food. Now we have food across the street, down the street. There's been four kitchens that have sprung up in the past couple of years, which has been great."

Putnam is anticipating more changes, both in expanding Bossanova's kitchen and in what he'd like to do with his career. "Down the road I might like to go back to school and really learn more of the business aspect of restaurants. You want to use the knowledge you have in the kitchen but want to make sure you don't fall into certain pitfalls because of ignorance."

He is undergoing plenty of transition in his personal life, too: a wedding planned for July, a new home and his first foray into home gardening. It's also providing some new challenges in his cooking. "My girlfriend's an accountant and a very picky eater. The food I do here and the food she likes are so different. I know that if I make something that appeals to her, it'll probably make everybody feel good. I like to make food because of interesting ingredients and such, but really I like to make food that makes people happy." 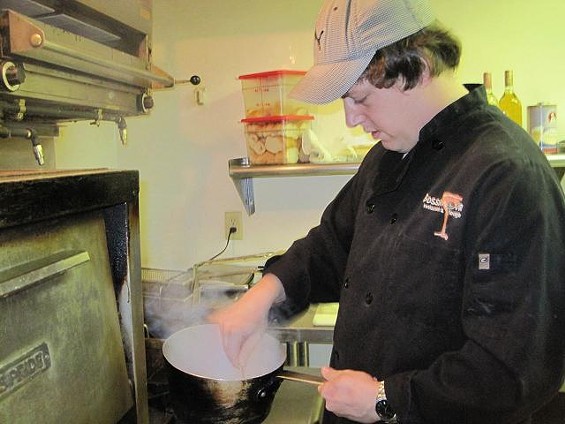 Pickiness hasn't been a problem for Putnam. "When I was a little kid I would take broccoli and cauliflower to school as a snack, whereas most kids want to take chips. That's always the way I've been eating.

"My parents were very old school. This is what we're having. If you don't want to eat, you don't have to eat it but there's no making special meals. I liked the food anyway, so it didn't matter."

Alton's been a change, but as his menus illustrate, Putnam thrives on variety. "It's so weird. Parts of [Alton] are so stuck in the past. But right away I got along with the people. They're so real. I love Columbia, and they couldn't be more different. I love having both in my life. Sparta and Athens, you know?"