April 19, 2010 at 2:21 PM
comment
At Schlafly's Repeal of Prohibition festival on Saturday Gut Check caught up with Curt Guntzviller, a brewer from Short's Brewing Company out of Bellaire, Michigan. Short's was one of three Michigan breweries represented at the festival.

Below are 20 questions one could ask a brewer, such as what do you eat with beer? How much does it take to get you drunk? How much do you drink at work? Cheers! 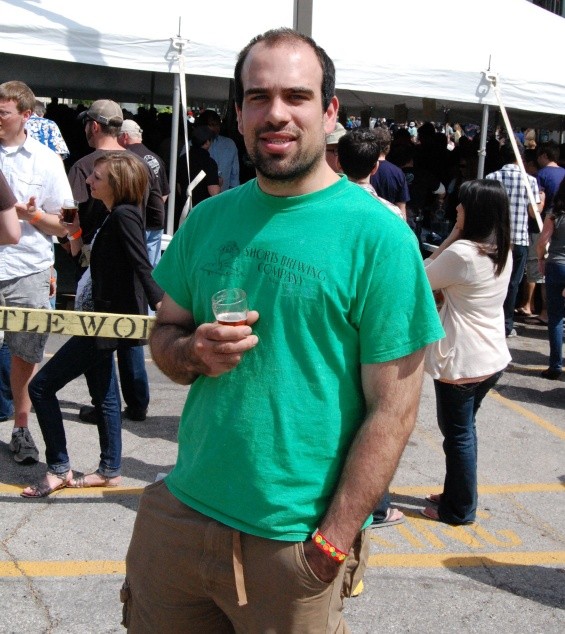 
Q: Tell me the quick history of Short's Brewing Company

About six years ago Joe Short originally started it. He had been home-brewing for a while and decided that he didn't wanna do the college thing, so he started a brewery at the age of 25. A lot of people didn't think it was very smart. But he took it on and basically reformed the town of Bellaire, Michigan.

Q: How many people do you guys employ?

About fifteen or sixteen  people work at the brewery.

Q: How much beer do you guys pump out a year?

Q: What about the year before?

The year before that we did just about 2,000 barrels. So we're growing quickly.

Q: How many different kinds of beer to you sell?

At all times we have sixteen beers on tap at our pub. That can range from light lagers to heavy stouts.

Q: How many different beers has Short's created so far?

I'd say our portfolio includes about 30 to 40 kinds of beer.

Q: Where is your beer available?

We have two locations, but we only serve at one public location at our brew pub in Bellaire. We do a lot of draft sales. We're just in Michigan for now, but we're in hundreds of restaurants, bars and tap rooms.

Q: Do you also bottle?

We just started bottling a little over a year ago.

Q: How much beer do you consume on an average workday?

Q: How do you come up with new flavors?

We have a very eclectic brewing staff. We are by far not normal. We might go out for a meal and have something delicious, and think, 'Can we put this into a beer?'

Q: How do you drink as much beer as possible and avoid the beer gut?

For me it's a lot of running around. Our brew system has six or seven steps. I run through those steps about 60 or 70 times a day.

Q: Do you take home a lot of beer from work?

I try to keep a fairly decent size stocked fridge at home. I have a lot of friends who come over and like to drink beer. They're kind of mooches.

Q: If you're not drinking Short's beer, what's your favorite to drink?

I like to try a lot of different stuff. The search for the perfect beer is never over. I gotta say, my go-to beer if I'm mowing the lawn or something, is PBR. It's cheap beer but it's pretty solid.

Q: You're in St. Louis, the home of ABInBev. Do you have a message for people who refuse to put down the Bud Light and try something new?

It's kind of hard to get people to try new stuff. All I can say is, give it a shot. I'm not saying Budweiser or Bud Light are bad. They do an awesome job with consistency and their quantity.

Schlafly has a great Summer Lager. I love it.

Q: How much beer does it take for you to get totally wasted?

Oh man, if I'm drinking full pints, when I forget my name it's usually eight pints into it.

Q: What's your favorite food to eat with beer?

I'm a big barbecue guy. Burgers and brats, can't beat it. I like meat over an open flame.

Q: If you're barbecuing and not drinking beer, should you be shot, or is a jail-sentence appropriate?

Jail time. A short sentence would probably be pretty good. I don't think I've ever fired up the barbecue without a beer. I'm mean that's just a cardinal rule right there.

Q: How did you get all of this beer down here from Michigan?

We drove a yellow Penske truck full of beer all the way from Michigan.

Q: Are you competitive with the two other Michigan brewing companies at the festival?