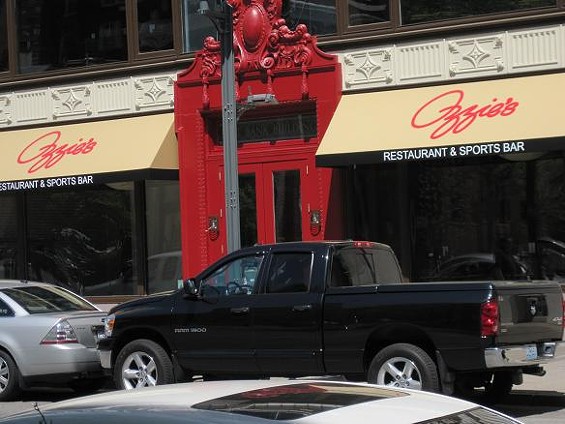 The inimitable Jerry Berger posted an interesting item on his Berger's Beat blog last item: "the presence of an informational picket of electrical workers" outside the new Ozzie's Restaurant & Sports Bar at 1511 Washington Avenue in the loft district.

When Gut Check stopped by the restaurant, which opened only last Monday, at lunchtime yesterday, two members of the International Brotherhood of Electrical Workers Local #1 were indeed standing outside, handing out fliers urging potential diners not to patronize Ozzie's.

The two IBEW members declined to comment but directed me to contact the IBEW Local #1 office, where business manager Steve Schoemehl confirms the dispute.

Schoemehl explains, "The reason is, there was an electrical contractor who installed electrical work by the name of Born Electric. And Born Electric is an employer who bottom-line pays their employees less than what's called the area-standard."

Schoemehl adds that actual picketing of a work site ends along with the installation. "[After that], we can resort to handbilling. Informational handbilling. We just want you to be informed."

Gut Check is awaiting calls back from both Born Electric and Robert Gallardo, owner of Ozzie's.