Have a Beer with Greg Koch, CEO and Cofounder of Stone Brewing Co. 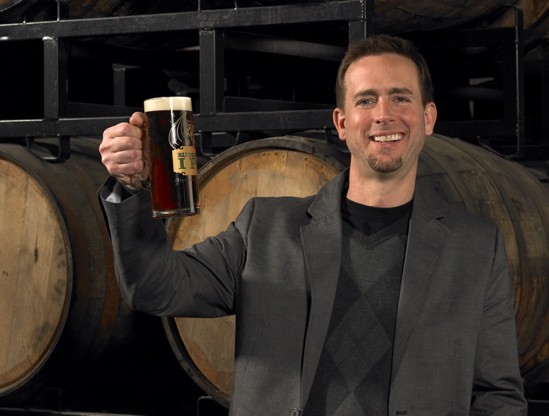 Stone Brewing Co.'s CEO and cofounder Greg Koch will be in town Thursday evening to give a speech to the St. Louis chapter of the Master Brewers Association of the Americas.

The St. Louis chapter of this industry organization is headed by Mark Gottfried, the head brewer at Morgan Street Brewery -- the first craft brewer ever to be president of an MBAA chapter. Gottfried invited Koch to speak about the history, philosophy and environmental commitments of the wildly successful Stone Brewing, as well as the Escondido, California-based company's equally compelling Stone Brewing World Bistro & Gardens.

The speech is a private affair, but earlier this week Koch announced via Twitter (he's @StoneGreg) that he'll be heading over to the Schlafly Tap Room "by 10 p.m." if anyone wants to stop by and have a chat.

Gut Check caught up with Greg before his trip, and he was kind enough to give us his take on the craft-brew scene.

Gut Check: When you announced you'd be in St. Louis to speak with the MBAA, you added "Yes, in St. Louis. Yes, me." There aren't any statute-of-limitations or reward issues we need to be aware of, are there?

Greg Koch: I hope not! As long as there's not a hit squad waiting for me that smells vaguely of large horses, everything should be fine.

How long will you be in town?

Less than 24 hours. I'm a glutton for punishment, but the only other option was not coming and speaking at all.

Have you been to St. Louis before?

Not as an adult.

What do you know about the St. Louis craft beer landscape from afar?

Well, I'm looking forward to learning about it. I have known Tom Schlafly for a long time and enjoyed the Schlafly beers I've been able to sample at events over the years.

You mentioned on Twitter that you'll proselytize to those who come out. What message do we Midwesterners need to hear?

I know I'll be preaching to the converted, but it never hurts to reinforce the message. Ten o'clock Thursday night at the Tap Room will be the craft-beer equivalent of a 10 a.m. Sunday service. ____________

The one issue not to bother bringing up is the one on the lips of most St. Louis craft-beer lovers: if and when Stone Brewing will begin distributing in Missouri. Koch admits he's "extremely flattered" by the interest and devotion shown by Stone's Missouri fans, but he'd really rather talk about other things.

Even if Stone Brewing won't be distributed here anytime soon, a stop at the Tap Room tomorrow night will give you the opportunity to converse with a bona fide pillar of the craft-beer community.

You can be sure Gut Check will be in attendance.

For the uninitiated (or the "unworthy," in Stone parlance), Stone Brewing Co. is a pioneering craft brewery and leader in the vibrant San Diego-area craft beer scene. Cofounded by Koch and president and brewmaster Steve Wagner in 1996, Stone has since grown to produce close to 100,000 barrels per year, including the iconic Arrogant Bastard Ale and innovative Stone Ruination IPA (first released in 2002 and clocking in at 7.7% and 100+ IBUs).

You can get a preview of Koch in this clip from the documentary Beer Wars: