This is part one of Robin Wheeler's Chef's Choice interview with Mark Sanfilippo of Salume Beddu. Part two is available here; for part three, click here. 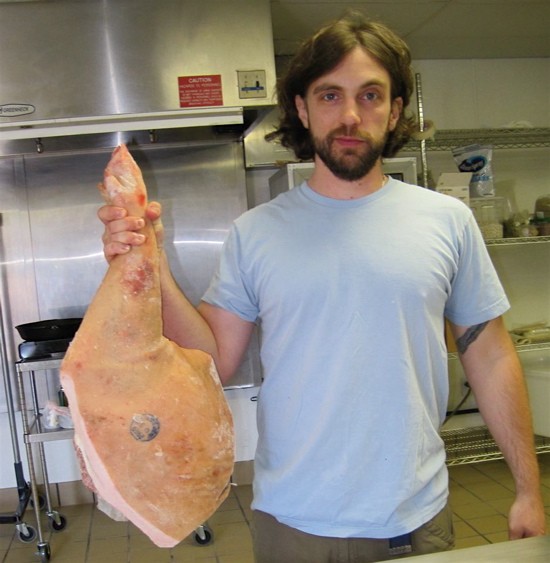 "I really appreciate obsessiveness in other people because I have that myself. If you're going to do something, do it right. Really figure out what separates OK and mediocre to what makes something really excellent," says Mark Sanfilippo, co-owner and salumiere of Salume Beddu (3467 Hampton Avenue.)

For the past two years, Sanfilippo has brought his obsessive love of cured meats to the artisan meat company he co-owns with Ben Poremba. St. Louis has responded. Salume Beddu has grown from Sanfilippo selling homemade salumi out of his home to having stands at farmers markets to their opening a storefront in south city.

A St. Louis native, Sanfilippo spent a decade in the west, attending graduate school in New Mexico and then moving to Los Angeles to work as a writer. He answered an open-call job interview for the opening of Pizzeria Mozza, owned by renowned chef Mario Batali and equally renowned baker Nancy Silverton.

"I knew that Batali would be making salumis and curing stuff," Sanfilippo says. "I didn't think I would get into being able to do it. I was making this stuff at home. I had a little wine cooler I converted into a curing cellar. I would make stuff like coppas and bring it into work. Nancy got all excited and said, 'We've got to sell this stuff and start making it here,' I showed them that I was passionate and very careful and tried to make as good a product as possible."

Despite the lure of working in a culinary hotbed and for some of the most respected people in the restaurant business, St. Louis beckoned.

"All of our meat was coming from Missouri and Iowa. We [Sanfilippo and his wife Jamie] were thinking about moving back here anyway, so I was thinking, why not do something with all this great pork and all these local farmers? Do something that's authentic and really old-school. We came here with that in mind and I started immediately. Within a week of getting back here, I started curing stuff just to see if people were interested. I made some coppas and salumis, then I started knocking on doors at places like the Wine Merchant to see if people were receptive to it."

They were. Sanfilippo's products gained a fast following. He soon caught the attention of Patrick Horine, cofounder of the Tower Grove Farmers' Market and Local Harvest Grocery. Horine offered Sanfilippo a grant.

"I talked to Patrick about the Tower Grove market as something to do, and he offered up the Incubator [grant]. That was a huge help. We didn't have to pay rent, didn't have to pay for the market. It was great. We got the space to work. That was a year, and then I found a shared space with a caterer on Cherokee Street for the next year. In the meantime I partnered with Ben [Poremba] and the goal was to get our own space, get USDA inspected. We can have more control over the product and do more stuff."

That level of control includes the new storefront, which will carry specialty dry goods in addition to Salume Beddu's meat. There's a large kitchen and a curing cellar. It's the heart of the business -- and it's where Sanfilippo's passion lies.

"It's fascinating. It's cooking without heat. I wish I'd chosen something easier in terms of health regulations, but it's worth it. There's a lot of things I didn't think I'd do. It's made me more scientific. I'm taking the pH of meat, recording it; weight-reduction tests and sending things off to the lab."

His timing couldn't be better. "The St. Louis I lived in ten years ago would not have been receptive to guanciale [an unsmoked bacon made from hog jowls]. I don't know. Maybe they would. Now people are more educated. People want more. They realize there's something better out there if they can find it."

Sanfilippo's vision fits well with St. Louis' cured-meat history. "Everybody's always asking if I'm in competition with Volpi. That's not really how it works. If someone has a platter of charcuterie, the best thing is to have something from five different people. You don't want ten things from the same person. You want some variety. People have their own style in how they do stuff. We're going to carry other peoples' stuff. Stuff we don't make, or stuff we really love. It's not like it has to be either/or. I'm just excited to be a part of it. It's kind of cool to be in a town where there is a salume appreciation."

Did your family cook when you were a child? What meals stand out? Very much so. We were always cooking, and both my mom and my sister were very into experimenting and trying new stuff out. Probably one of my favorite meals as a kid was beef spiedini that my mom learned to make from my Sicilian grandmother. It's a popular St. Louis Italian meal, and it seems like everyone's family has a slightly different version. But to me, my mom's was the best.

How old were you when you started cooking? Hard to say. I was helping out from a very young age. I probably cooked my first full-on meal for the family when I was eleven or so, and it was most likely meatloaf with a salad of some sort.

What was your first kitchen job? I worked at a great little bakery in Santa Fe called Sage Bakehouse. They were obsessed with perfect bread and had some proprietary sourdough starter from France that was just incredible. I appreciated their obsession and it really helped intensify my own attention to detail. Did you attend culinary school or college? UMSL for my undergrad (philosophy, German literature, classics) and St. John's College (Santa Fe) for my graduate studies.

What do you eat? It varies from season to season, but one constant is pasta. There is just something really satisfying about well-made pasta, no matter what you put on it. I like making it, I love eating it and it lends itself to the sort of communal eating that speaks to me. Pasta makes a house feel like a home.

We'd be most surprised that you eat _____. Zone Bars. I know they're probably really bad for me, and I don't even really like them, but I have this tendency to not care about what I eat unless I really have the time and space to enjoy it with others. If I'm in a hurry and by myself, I usually forget to eat so I keep these bars around to make sure I eat something.

What do you cook at home? I don't limit myself to Italian food by any means. Jamie (my lovely wife) really loves Thai food, as well as my take on a sort of generalized Middle Eastern food --. falafel, hummus, harissa, tagines, etc., so I end up cooking those things quite a bit. There's nothing better than cooking for someone who truly appreciates it.