If You Hand Cut Your French Fries, Learn to Cook Them Properly

Welcome to Fly in the Soup, a new feature in which Gut Check contributors rail against those culinary experiences that annoy us most. 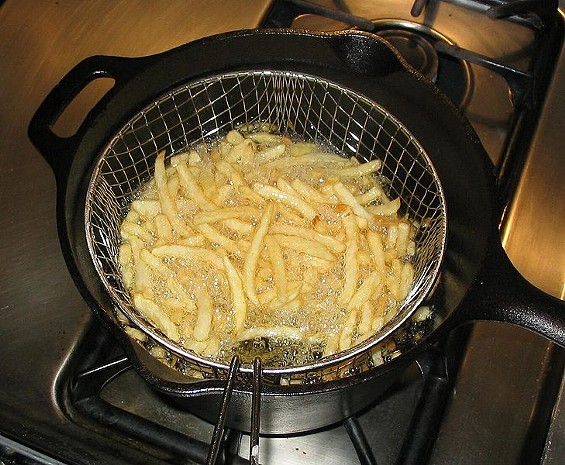 In my younger and more vulnerable years as a food writer, few words excited me more than "hand-cut fries." It suggested a restaurant willing to go the painstaking extra steps to serve the best possible product, even when dealing with a dish that many take for granted. Make no mistake, though: When cooked properly, hand-cut French fries are one of the most sublime culinary pleasures.

A few days ago, at a relatively new restaurant that shall remain nameless, I encountered what is far too common: French fries touted as hand-cut that, while an attractive golden brown color, were limp instead of crisp, with a mealy texture and the distinct flavor of undercooked potato.

Cooking hand-cut French fries isn't difficult. But it takes time -- a lot of time. Even a chef as renowned as Thomas Keller of the French Laundry says the hell with it and uses frozen fries rather than put his kitchen staff through the process.

When I was a teenager working as a deli clerk and short-order cook in Ocean City, Maryland, prepping French fries was second only to changing the deep-fryer oil as my least favorite task. But I endured it because the fries we served were perfect. I mean that. They simply could not have been better: crisp on the outside, fluffy inside; salty, fatty, potato-y goodness.

So if you're going to tout your fries as hand-cut, thus attracting French-fry freaks like myself, you had better follow through. Because cutting potatoes by hand is merely the very first step. (Or the second, if you insist on peeling the potatoes first.)

After cutting them, you have to soak them in water for several hours. This is essential. If you don't soak them, the finished fries won't be as crisp as they could and should be. It doesn't matter how good your potatoes are, how fresh and hot your oil. The fries may look great, but they won't be crisp.

If you are serious about your hand-cut fries you will find or develop a recipe that works well and then make sure that your kitchen staff follows it to the letter every time.

If you aren't serious about your hand-cut fries, I feel sorry for you. At the very least, stop breaking my heart. Just call 'em fries.