This is part three of Robin Wheeler's Chef's Choice interview with chef Marc Baltes of Pi Pizzerias; part one is available here; part two is here. 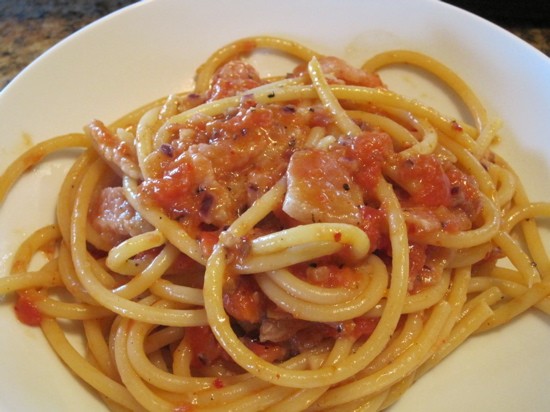 "The absolute key to a decent bowl of pasta is pasta water," says Pi's Marc Baltes as he ladles water from the pasta pot into his sauté pan of tomatoes, guanciale, onions and olive oil for his buccatini all'amatriciana. It's his favorite after-work dish, because it comes together quickly and offers a wallop of flavors.

Appropriate for a chef who describes his food as "ballsy."

Instead of using pasta as a canvas to be covered with sauce, his all'Amatriciana highlights the golden flavor of the noodles, which stand up to a light coating of peppery sauce. Pecorino cheese adds a bit of sourness while the surprisingly mild unsmoked bacon gives the dish a grounded heartiness.

"That's the entertaining part about eating buccatini," Baltes says as he takes a forkful of the unwieldy thick noodles. "You're going to end up wearing some of it, and that's OK.

"This and a beer is usually what I have when I get home."

Pasta all'amatriciana Serves one Bring a large pot of water to a boil. Salt it so it tastes like the sea. When it's boiling rapidly, add the pasta. If you're using spaghetti or buccatini, you want a bundle about as big around as a quarter. For penne use two small handfuls. 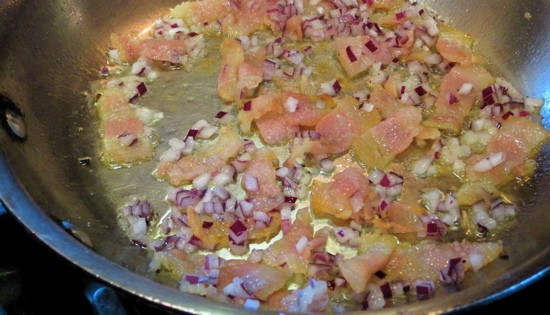 Traditionally the dish uses guanciale, a Roman unsmoked bacon made from the jowl and available locally from Salume Beddu. Use that if you can, but I usually use pancetta. You could even use a bacon that isn't too smoky or sweet. Whatever you use, you need about two-slices-of-bacon worth of meat, cut into very thin, flat squares.

While the pasta is cooking, add a thin layer of olive oil to a pan over low heat. Add the pancetta and cook gently until just the edges are starting to crisp.

Finely dice about a quarter of a small red onion and add to the pan. Cook until the onion is starting to turn golden and the pancetta is still soft. Add a big pinch of red pepper flakes and a generous grind of black pepper.

Add about three whole canned tomatoes to the pan and chop them up with a spoon.  They should break down and melt into the oil.

When the noodles are almost done, reserve a couple of ladles' worth of pasta water, drain the noodles and add them to the pan. Add a generous drizzle of extra-virgin olive oil and a little pasta water. The pan should seem a little too wet and saucy. Add the grated cheese and stir into the pasta; it will thicken the sauce and help it stick to the noodles. If you need to, add a little more water, but you should have only enough sauce to coat.