Draw Up Your Will Now, Because on Monday, April 12, KFC's Double Down Will Kill You 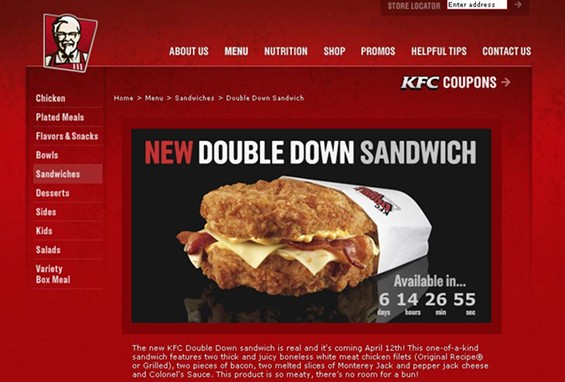 Yes, that's right. It's a sandwich THAT USES PIECES OF FRIED CHICKEN AS THE BUN.

The nutrition info on KFC's website suggests that the sandwich, while not exactly health food, isn't as godawful as you might think (relatively speaking, of course): 540 calories, 32 grams of fat and (wince) 1,380 milligrams of sodium. That compares favorably to, say, a Chipotle burrito.

Frankly, I'm more concerned about the "Colonel's Sauce." I'm sure it's just some generic fast-food condiment, but the name is terrifying, not least because the actual colonel is long dead. Please, KFC, reconsider the name.

At any rate, Gut Check might not be able to resist the sheer WTF?-ness of the Double Down. Look for a report on the sandwich next week.