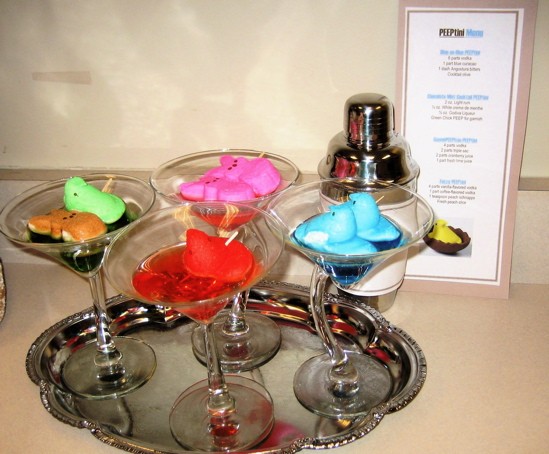 What started as a trend -- making fun of Peeps and using them for non-food purposes -- has become an annual rite of spring, what with the Washington Post's annual Peeps Show diorama contest and National Geographic's Peeps in Places project. Peeps have even become the focus of fiery legal action in Colorado, thanks to an unwanted Peeps-related Easter display.

Holidays are about tradition, so let's return to the tradition of using Peeps as they were intended: as food. This isn't to say that eating Peeps straight from the row is the best way. Not when so many cooks have developed such spectacular Peep-related dishes.

Peeps Sunflower Cake Using Peeps as cake decoration is a simple place to begin. Using Peeps as something that's not Peep-like, such as these Peeps-as-petals, requires a bit more creativity.

Patate Douce Casserole Avec Peeps Take the winter holiday standard -- sweet potatoes topped with marshmallows -- and switch it up for Easter. Sweet taters and Peeps: festive and loaded with fiber!

Peeps Sushi It's been done with Swedish Fish, which is so obvious. A little chicken sashimi, though? Not a good idea in real life, unless you'd like a raging case of salmonella. The Peeps version is less likely to give you explosive diarrhea, although ketoacidosis might be a concern.

Peep Pops Feeling particularly aggressive toward stale sugar-coated marshmallow treats? Jam a stick up its ass, dip it in molten chocolate, then let the chocolate set into a shroud of bunny. Delicious!

Peeps Fondue Not patient enough to let the death shroud harden? Opt for fondue. Stabbing a chick with a long fork, dipping it in molten lava-hot chocolate and burning your esophagus is fun, too.

An Easter Feast with a Peep in Every Dish Seattle chef Jason Wilson, challenged by a reporter, found a way to incorporate Peeps into a fine-dining Easter feast. From egg salad with potatoes, caviar and shredded Peeps to ham with a heap of caramelized Peeps, Wilson managed to make Easter both fancy and colorful.

Peeptini It wouldn't be a family Easter celebration without the numbing elixir of vodka-soaked Peeps. It's like Sex and the City. With marshmallow bunnies. And Grandma. And Jesus. Happy Easter!