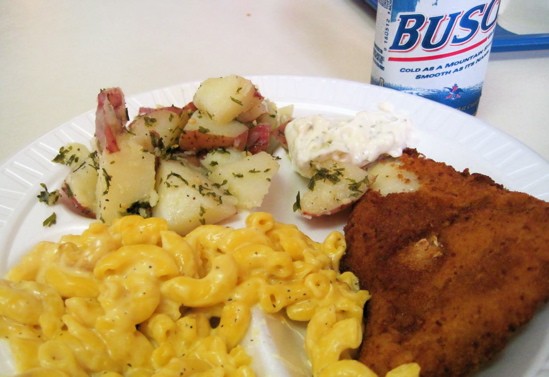 Many churches don't fry on Good Friday, but St. Joan of Arc does. They're the workhorse of St. Louis fish-fry scene. The long cafeteria's arranged to accommodate lengthy lines. Carry-out to the left, dine-in on the right, and keep it moving.

Once the line hits a certain point, St. Joan volunteers have been known to pass out free beer. Get there early and it's only $2 a can.

St. Joan's advertises that everything is homemade, but the fried cod looks and tastes a lot like the frozen triangles. The catfish, however, looks like the real hand-breaded deal. Two fellow diners vouch for its deliciousness.

The side dishes are where it's at. They're definitely homemade and among the best on the scene. Macaroni and cheese studded with a heavy dose of black pepper stands out, as do the al dente and flavorful green beans. The cole slaw's colorful and creamy. But the Irish potatoes are a must. Boiled red potatoes drip with butter, parsley and a little garlic, so tender they crumble under a plastic fork.

The massive dessert table also stands out. Chocolate-frosted chocolate cake cut from a nine-by-thirteen Pyrex pan screams freshness. It's moist and tender. It might have come from a mix, but that doesn't matter. Squares of thick chocolate-chip cookie, cut from a giant pan cookie, are dense and chewy. While there are a few items, like sugar cookies, that appear store-bought, overall it's a classic bake sale. 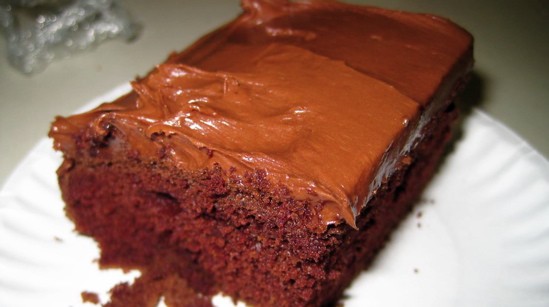 There's no formal entertainment unless you're there late enough to witness the effects of free beer.

St. Joan's a no-frills, traditional fish fry with friendly volunteers and decent food. It's a good low-key way to end the Lenten season without a lot of fuss and dancing.

(Cod's nothing special, but the catfish is tasty.)

(Among the best in town. The Irish potatoes alone are worth the trip.)

(Keep an eye out for that Pyrex pan of cake.)

(...If you get there late enough for a free beer)

(Aside from free beer antics, it's an eat-and-go atmosphere.)