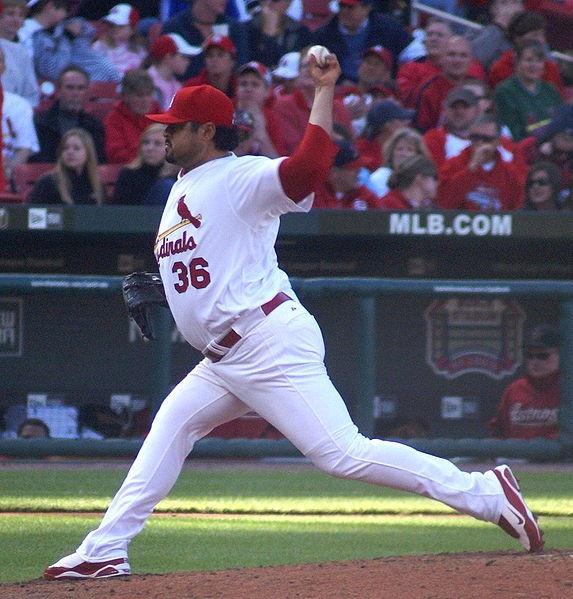 That's right: The Cardinals pitcher announced this morning that he will join the ranks of current and former Redbirds who have opened restaurants in St. Louis when Dennys's, a casual family restaurant, debuts in Affton this summer.

"I've played for many teams in my career, but St. Louis is the place where I feel at home," the lefty reliever said by phone from Jupiter, Florida, where the Birds on the Bat were preparing to play their Grapefruit  League finale against the Florida Marlins. "The least I could do to repay the people of this city was to give them some good home cookin'."

Though details of the menu are still being hammered out, the southpaw hurler envisions a wide range of popular items like burgers, sandwiches and chicken fingers. Per the request of bullpen mate Kyle McClellan, breakfast will be available throughout the day.

"We spend a lot of time together in the bullpen, of course, and I can't believe how much Kyle talks about breakfast. It's like, 'Is it the 8th inning yet? Because I'm tired of hearing about flapjacks.' And if Waino or Carp pitches a complete game? Forget it."

Dennys's will feature baseball memorabilia, including signed jerseys from each of the ten teams for which the sillyside ballhawker has played in his major league career. Reyes also foresees some baseball elements on the menu: "We're gonna do a breakfast platter -- this was Kyle's idea, of course -- with eggs, pancakes, bacon and sausage and call it The Home Run Breakfast. Because, you know, as a pitcher, you don't want to give up a home run, and the diner won't want to give up this platter. I think it'll be a big hit."

Though Reyes is the majority owner of his namesake eatery, several of his fellow Cardinals pitchers have invested: McClellan, Trever Miller and Blake Hawksworth. Closer Ryan Franklin was supposed to have a stake, but his investment inexplicably disappeared in the final weeks of the loan process.

Look for Dennys's to debut shortly after this All-Star break. Gut Check will have more details as they become available.