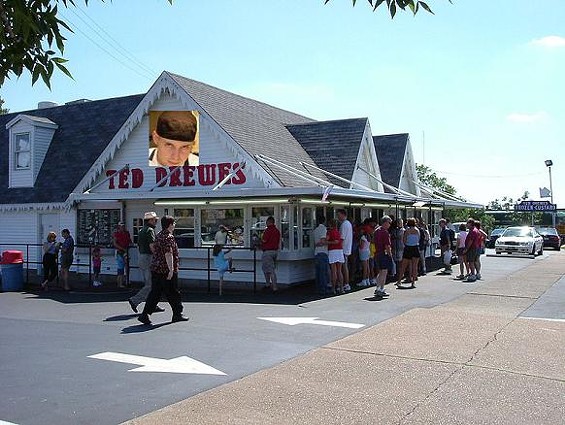 "It was time for a new challenge," Craft said at an impromptu lunchtime news conference at the Chippewa Street Ted Drewes stand to announce the previously hush-hush deal. "I've done the contemporary American thing, the small-plates/mixology thing, the French thing. Frozen custard was the next logical step. I'm honored and humbled that Mr. Drewes would allow me to carry on his family's proud tradition."

"Dad would be proud," a visibly moved Ted Drewes Jr. added. "Though the family might not own Ted Drewes Frozen Custard any more, this deal ensures that the name will live on well into the 21st century."

Craft was quick to note that Ted Drewes Frozen Custard by Niche will continue to offer the flavors and specialties, like the Concrete, that have made Ted Drewes a St. Louis icon. However, Craft will expand the lineup to include new flavors and new technologies.

"At Niche, we've been working on a way to create what I call a Reverse Concrete," Craft explained. "It uses agar-agar as a stabilizing agent, and we sous vide it in an immersion circulator. It's a proprietary method, so I can't really say much more.

"We still have to refine the finished product, especially after what happened to one of our line cooks during a trial run. But we think we have the problem ironed out, and Stumpy -- that's what we call him now -- should be back to work any day."

Craft was more than eager to show off a few of the new frozen-custard flavors, offering a long line of Ted Drewes customers free samples of Grass-Fed Lamb Shoulder, Pork Liver and Sweetbread Surprise concretes.

Some customers were skeptical. "I don't know," said Mary Fredrickson, 43, of Dardenne Prairie after trying the Grass-Fed Lamb Shoulder. "It's sort of like licking a package of meat right out of the freezer."

Four-year-old Willie Delgado of Ferguson was more succinct: "This tastes like medicine and poo-poo!" he shouted as he flung his sample spoon at his baby sister. (Gut Check could not confirm which flavor he had sampled.)

Craft was undaunted as he walked the long lines on this unseasonably warm March day. "It really is good, guys," he called out. "And gals."