Gut Check closely monitors new releases of beer, wine and other booze, searching for things we (and, yeah, you) shouldn't miss. We then give a select few bottles a spin before you plunk down your hard-earned. 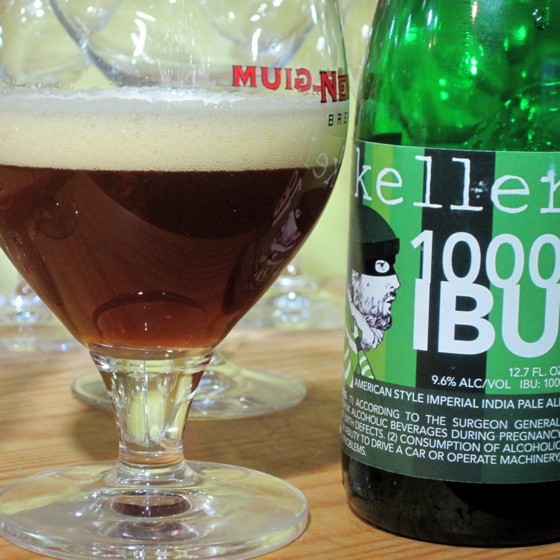 Just in is a limited offering from the always innovative Danish craft brewer Mikkeller, called 1000 IBU. IBU stands for "International Bittering Unit," and it measures how bitter a beer is. A "triple hops brewed" Miller Lite checks in at less than 10 IBU, whereas a very "hoppy" craft IPA will check in at 70-plus. Though it varies from person to person, the human tongue can probably detect bitterness as low as 10 IBU and as high as 100.

Some craft brewers have taken to touting the IBU of their beer the way truck manufacturers tout towing capacity -- the thinking being that bigger is better, even if it's way more than you'll ever need. Mikkeller is a brewery with a sense of humor, as well as a spirit of innovation. Ergo the theoretical 1,000 IBU -- theoretical because it's simply not physically possible for the beer to absorb all of the bitterness from the metric (it's from Denmark) crapton of hops that Mikeller adds to the beer.

The hops aren't added just for bitterness. They impart flavor and aroma, too.

But how'd it taste?

Light amber, with a sticky, resinous head of fine, creamy foam. Smells outrageously hoppy, with pine and citrus notes dominating. Still a bit of caramely malt manages to poke through. The flavor's even more intensely hoppy than the aroma, but here too the malt fights its way through, providing a modicum of sweetness. The finish? Let's just say this beer stays with you.

When the foam subsides: This is a beer that's well worth tasting. Also worthy of note is the fact that Mikkeller has brewed a series of ten beers, each using the same base beer but a different hop. Try a couple and you'll see what a difference different hops make.