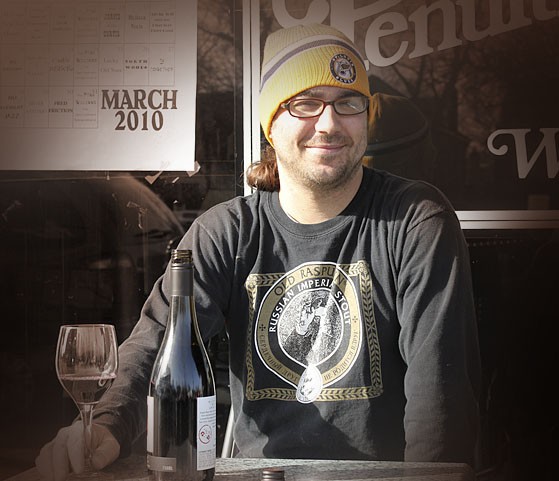 Loop landmark Riddle's Penultimate Cafe & Wine Bar (6307 Delmar Boulevard, University City; 314-725-6985) has long been a beacon of fine wine and eclectic cuisine that spotlights the work of local farmers. As ownership and chef's toque have passed from founder Andy Ayers to his daughter KT, stewardship of Riddle's wine program passed to longtime employee and now bar manager Derek Flieg. While much has stayed the same, one critical component of the Riddle's philosophy that has carried over is constant change.

On any given night, you'll be able to choose among 250 to 300 selections, most at fair prices -- twice retail or below. Older vintages can be absolute steals, but they are being slurped up more quickly than Flieg can reload. He does promise that there are "cases of wine stashed all over the restaurant" awaiting completion of their evolution before being added to the list.

Next up: Gut Check's Wine List CherryPick: Three wines to try from Riddle's list, painstakingly researched and selected for our discerning readers...

2000 Chateau Olivier Graves ($36) and 1999 Chateau du Tertre Margaux ($50) Aged red Bordeaux from two quality producers for $50 or less? We'll take 'em both! The 2000's a riper vintage, the 1999 more elegant owing to both the vintage and the appellation. Have you been wondering why Bordeaux is a classic accompaniment to a fine dinner? Look no further.

1997 Joseph Drouhin Griotte-Chambertin, Grand Cru ($140) OK, this isn't cheap, but Griotte-Chambertin is never cheap, and it's rarely seen at all (the entire appellation covers only 6.5 acres). Riddle's price for this thirteen-year-old example is well below the retail price of the current vintage. 1997 was a more forward vintage, but with Drouhin's elegant style, this wine ought to be beautiful now. Made from the winemaker's own holdings in one of the Burgundy cognoscenti's favorite grand crus, this one is worth a shot if your budget can take the hit.

Next: More about Riddle's wine list... Riddle's strength remains Bordeaux, with almost 40 selections spanning all of the famous sub-regions. But while the priciest bottles on the list are Bordeaux, about half of them are priced at $40 or less and are well-chosen to be food-friendly. The pricier bottles are high-end properties from well-regarded vintages like 1982 and 1986, which make their cost fair, if beyond most people's budgets.

No other region rivals the Bordeaux depth on Riddle's list, but North American pinot noir, syrah and cabernet sauvignon bring lots of good choices. A few sections of the list need attention, the sparkling wines in particular. It'd be easy for Flieg to replace selections such as Martini & Rossi Asti, Freixenet and Veuve Cliquot NV with a few small-house Champagnes and some of the great value Spanish cavas and Italian proseccos that abound these days. Many small producers of Champagne offer a one-two combo of mind-blowing value plus complexity. Their artisanally minded counterparts in Spain and Italy don't lag too far behind -- and at even more attractive prices.

Flieg is always on the lookout for wines to add to the list. "I'm tasting new stuff at least three times a week," he says, adding that new discoveries on the value end of the spectrum are given a trial on the by-the-glass list.

Those by-the-glass offerings, incidentally, are worth examining in detail -- something that cannot be said at most restaurants. For one thing, "by the glass" is a bit of a misnomer -- you do get a glass, but your wine arrives in a small pitcher that holds a quarter of a bottle (about six ounces). That's a double benefit: A typical by-the-glass pour is closer to four ounces, and it's often delivered via a glass that doesn't hold much more than four ounces. Drinking out of a glass that's not filled to the brim allows you to actually smell what you're drinking -- and that's key.

Flieg says the by-the-glass list changes frequently, but that there are some longtime residents because they're favorites of Riddle's regulars. He also shifts the composition of the twenty selections seasonally -- more reds in the fall and winter, more whites at other times, with fresh rosés making an appearance in the spring. The broad range is matched by friendly prices, with most glasses tagged at $6 to $8, and nothing over $9. It's a great way to match wines with courses and still be happy when the check arrives after dinner. Yet another plus: The list contains detailed descriptions of the wines, and Flieg says he's more than happy to offer a taste if a customer is uncertain about whether to commit to a glass.

For a wine bar lover, the only downside to Riddle's laid-back ambiance is the fact that smoking's allowed in the bar, which is located at the front of the restaurant and which includes several dining tables. (The new smoking ban will fix that.)

Be aware, too, that the bar hosts live music nearly every night. Quality there is high too, but it can make conversation and quiet contemplation a challenge.

Strengths: Breadth of selection; excellent prices on older vintages; inexpensive and interesting by-the-glass selections Weaknesses: Smoky bar; some parts of the list, the sparkling wines in particular, could do with some sprucing up