We'd be most surprised that you eat _____. Microwave popcorn, and just because I am lazy. Stovetop popcorn is the best, but sometimes I just want to punch a couple buttons and be done with it.

What do you cook at home? Whatever my wife tells me to, and whatever my kids will eat.

3 favorite restaurants in St. Louis, besides yours? The Mississippi Mud House, Banh Mi So on Grand, and can't remember the name of the taco place on Cherokee with the rainbow colors on the outside -- but that place.

Local chef who most impresses you? Josh Galliano. He has been very helpful over the last year or so, giving me feedback on menus, offering advice, etc. I think he is also doing some progressive food at Monarch that is really exciting. And Chris Bork, the chef at the Mud House. He has been a huge help to me in the upstairs dinners that we have done. I have learned so much from him. He's quite talented and creative. 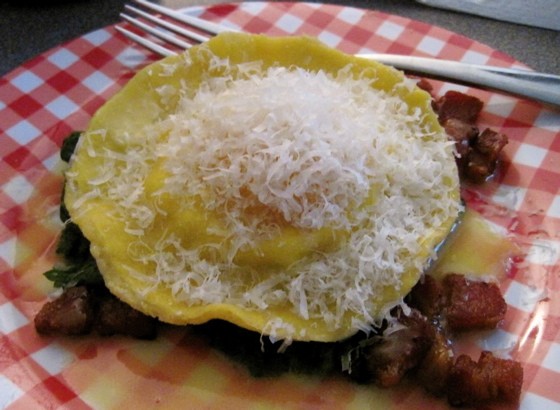 Most essential ingredient in your kitchen? Diamond Crystal kosher salt.

Favorite local ingredient and where you get it? Jeremy Parker's grass-fed beef -- Missouri Grass Fed Beef -- is really amazing stuff. You can get it at Tower Grove Farmer's Market and at Maplewood Farmer's Market.

Five words to describe your food? Whimsical, adventurous, creative...and tasty. Need one more? How about improving?

One food you dislike. Kidney beans.

One food you can't live without. Popcorn.

What's the first rule for your kitchen staff? Have fun.

What ingredient will never be allowed in your kitchen? Margarine.

Your best tip for home cooks? Don't be restricted by recipes. Unless you are baking, think of recipes as a series of general guidelines, not as absolute must-do's.

Your favorite after-work hangout? Riley's on Arsenal at Arkansas.

Favorite kitchen tool. Whisk, and this spoon that has a flat edge to it -- just love that thing.

Chefs who inspire you? Might sound silly, but there are just too many to list. Favorite cookbooks? I have a lot of cookbooks, so this is hard. If I had to pick a couple, I would say Fergus Henderson's Nose to Tail, Simon Hopkinson's Roast Chicken and Other Stories, Thomas Keller's French Laundry and Heston Blumenthal's Fat Duck.

Favorite music to have in the kitchen? If I am controlling the tunes, probably a mix of British post-punk stuff from the early '80s or the Discovery radio station on Pandora.

Most difficult lesson you've learned in this business? To be thick-skinned. Which is hard, because I am by nature too sensitive for my own good.

When did you know for sure that the chef's life was for you? Not sure. All I know is that when I am cooking, I have a profound sense of fulfillment, and that has always been the case.