Dinner and a Movie: "IMAX Under the Sea" and Captain D's

The screenplate: Convincing a hungover person to surrender to "the Omnimax experience" is tough but doable. Just make sure the documentary features water animals humping and eating each other alive in Omnimax hugeness. Add the thunder of surround sound, then sit so far in front you must look directly up -- no, make that backward. Feelin' nice?

Now cue the narrator to inform you that all these bright sea creatures will die by global warming and that it's our fault. That narrator, by the way, is Jim Carrey, ALLLLLRIGHTY THEN?....Hey, don't get seasick. We'll soon regain our mind/stomach balance. Because later we are going to Captain D's.

For now, we're here to report that Under the Sea, all on its own, is truly a sensory feast.
Fish are so weird. Consider the Wobbegong shark. It resembles a carpet most of the time, except when it's murdering something for food. Did you know crabs sometimes wear jellyfish as protective helmets? Pretty clever!

And did you know some male cuttlefish resemble females, so while other boys are fighting they can sneak in and fornicate with the ladies? That's what we like to call some true "tranny fish lovin'." Only don't say that aloud; nobody will laugh. (You're guaranteed to be sitting next to the most humorless group of second graders ever.)

Carrey warns, in essence, that CO2 emissions are heating up the oceans. That endangers species such as the insanely cute Australian sea lion. But do not fear: By the end of the movie, you'll be certain the human race can redeem itself. That's because during closing credits, one hears a remake of the Beatles' "Octopus's Garden" that, unlike the original, doesn't make anybody throw up.
Now then: Time for some Captain D's!

First off, that steering wheel and oar on the wall aren't fooling anybody. At this South Grand port-of-call, "wharf" is less a functional place than a sound that might emanate from the men's room. Also fast food is evil blah blah blah.

But you know what else fast food is? Well, if it's a Captain D's combo of battered fish (probably pollock, the cashier lady imparted), fries and hush puppies, it's effing delicious! 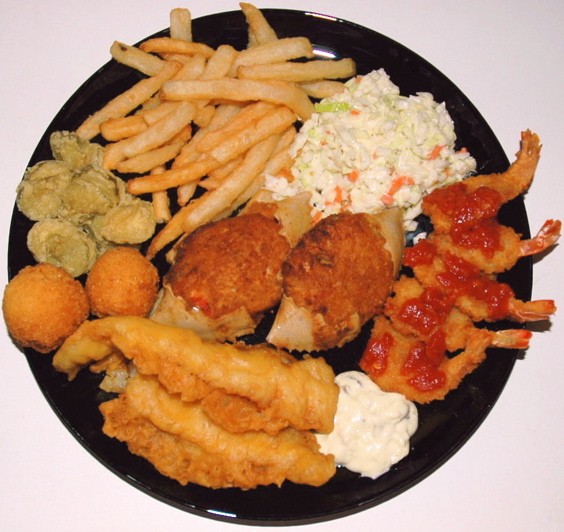 Although, a word about them hush puppies. In Under the Sea, Jim Carrey informs us that great white sharks usually refrain from gobbling up giant stingrays, for reasons embedded in the term "giant stingrays." But every so often, biologists will slice open a great white's tummy and find an undigested stinger tail.

It's possible that if you dine at Captain D's and then, say, a week later, are subjected to dissection à la great white shark, scientists might discover not one, but two nearly intact hush puppies in your gut.
"Unfortunate, his last meal," they'll say haughtily.
Perhaps. But more likely, you'll simply live to regret it.