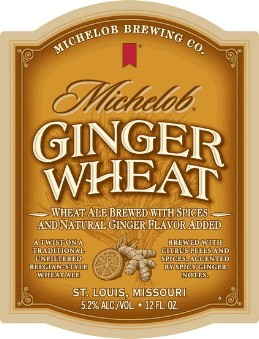 Says he: "The Ginger Wheat is an interesting twist on wheat beers. The ginger is refreshing and really makes for a nice drinking beer. I look forward to being able to pick some up at the store!"

Wade's wait is over. The new brew's now available in the company's spring sampler pack of unfiltered wheat beers, along with Shock Top, Hop Hound and Dunkel Weisse.

"For Michelob Ginger Wheat, we took a Belgian-style wheat ale and looked to Asian cuisine for inspiration," says brewmaster Craig Heisner. "The beer has unmistakable ginger aromas on the nose and crisp and spicy flavors on the tongue, without overpowering the other citrus notes. The first sip implores your taste buds to pair the beer with a selection of sushi and the finish cleanses your palate, getting you ready for the next bite."