Church fish frys don't have marketing budgets. But at St. Mary Magdalen in Brentwood, they've at least got someone with a sense of humor and an eye for cute graphics. Why else would they have yard signs dotted with colorful fish, proclaiming, "God's Cod!" with their fish fry times? 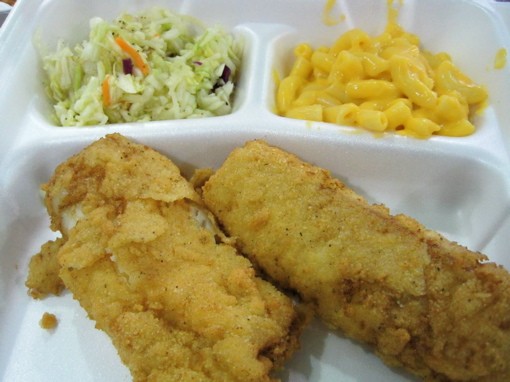 It doesn't stop at the signs. Inside, volunteers sport the God's Cod! logo on pale blue T-shirts and aprons. They meet us at the door, selling cans of Bud and plastic cups of boxed wine. In case the line's too long, later a man walks by, selling beer from a gallon tub filled with ice. On top of the cans, little plastic containers filled with something colorful.

We joked about Jell-O shots at Epiphany last week. Surely it's not ...

Later, a woman in one of the T-shirts walks by with a half hotel pan. We ask what's inside.

St. Mary Magdalen has Jell-O shots. God's Cod with a side of Satan's Gelatin!

She always was my favorite saint. 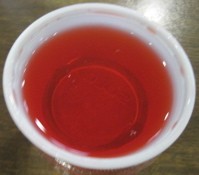 God's Cod, turns out, isn't a bad name for what they're serving. This is the best fish of the season so far: large boneless cod fillets, thick and flaky, with a crisp batter that doesn't overwhelm the fish's delicate flavor.

In a creative move to match the logos, catch phase and alcohol supply, they're crafting the tasty cod into fish tacos. Flour tortillas filled with crisp shredded lettuce, one fillet and a choice of tomato-mango or ranch salsa. While the former was the more traditional, the latter was a creamy and spicy, almost a Southwest-style tartar sauce. It works, and it makes a great departure from the usual fish fry offerings.

Sides are fine, though they don't quite match the quality of the fish and tacos. Along with the usual slaw, green beans and boil-in-bag mac & cheese, there are spiced apples and a rotating side. This time it's penne with red sauce.

Oh, and the Jell-O. The Jell-O is fantastic.

(Thanks to the fish taco)

(Good enough, but could pale in comparison to the fish)