Go from Guinness Zero to Guinness Hero in 10 Easy Steps! 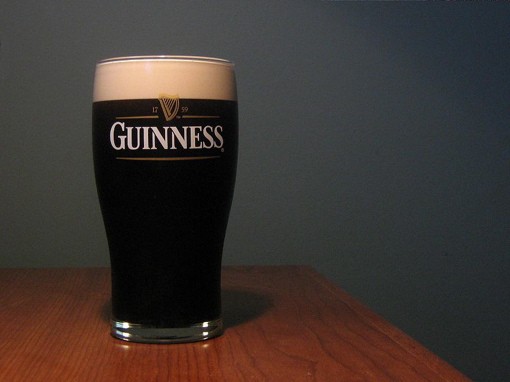 2. What makes it black? The dark color (Guinness officially claims it is very dark ruby, not black) comes from roasted barley. Unlike most of the barley used in making beer, roasted barley isn't malted. Still, this seemingly defining characteristic wasn't a feature of Guinness until the late 1920s or early 1930s -- well after the company had established itself as a brewing titan.

3. Was Guinness always about stout? "Stout" was originally merely an adjective in brewing parlance and meant nothing more than "strong." It was applied to beers both light and dark in color. Guinness gained fame as a brewer of porter, another style of dark ale, and in the mid-1800s it applied the term "stout" to one of its products to indicate a premium level of alcohol and richness: Guinness Stout Porter. Eventually "porter" was dropped altogether and stout evolved into a style all its own.

4. What's up with the head? Most beer is dispensed with pressurized carbon dioxide. Guinness popularized a system that uses a mix of nitrogen (75 percent) and carbon dioxide (25 percent). The beer is forced through a special faucet that strips out the gases, leaving it "smooth"-tasting owing to the lack of carbonation, and letting the freed nitrogen work its chemical and physical magic to make the thick head that proudly sits atop your pint to the last sip.

5. Much is made of Arthur Guinness' business coup in signing a 9,000-year lease on the brewery property for an initial £100 plus an annual rent of £45. But who was the chump on the other side of that deal? That would be one Mark Rainsford, whose eponymous brewery had, according to what reports exist, sat unused and unsold on a street of empty breweries for a decade before the lease was drawn up. A hundred pounds was a large sum of money in 1759, and the £45 a year nothing to sneeze at. Only the inconceivable magnitude of Guinness' success turned what Rainsford had to have thought was a great fleecing of young Arthur into a pillar of the Guinness legend.

6. Guinness is responsible for starting the Guinness Book of World Records, right? Yep. In 1954, after getting into an argument with some buddies while out hunting, the head of Guinness at the time, Hugh Beaver (yes, really), commissioned a handy reference book of all sorts of hard-to-prove facts as a means to settle disputes. The first edition of the Book of Records was a promotional item Guinness gave to bars stocking its beer, to be used to settle disputes before they turned into full-blown fights.

7. Stout's pretty much always been the be-all, end-all of Guinness, true or false? False. Guinness has never feared to innovate, even when it probably should have been very afraid. This often resulted in hilariously unintended consequences, such as Guinness Smooth, Guinness Breó (a wheat beer!), and Guinness Shandy (a mix of lemonade and beer). Though how Guinness Light failed with this sort of powerhouse ad campaign, we don't know...

8. Does Guinness taste better in Ireland? We're not going to debate the precious memories of your drunken nights in a cozy pub in Ireland, but the fact is that draft Guinness for the U.S. is brewed at St. James' Gate, right alongside draft Guinness for Ireland. Sure, it has to travel farther, so there may be some minimal degradation, but if you're having a subpar pint in the States, it's probably just that your friends aren't as charming or interesting as the Irish, leaving you more time to overanalyze what's in your glass. That, or the bar you're sitting in doesn't keep its beer lines clean enough.

9. What country consumes the most Guinness? Great Britain still hoists more pints of Guinness than the Irish, who come in second. Rounding out the top 5 are (in order) Nigeria, the United States and Cameroon. Those African nations are even more impressive, as most of their Guinness consumption is in the form of Foreign Export Stout, which checks in at almost twice the alcoholic strength of standard Guinness.

10. How do you pronounce sláinte? It's the Irish equivalent of "cheers," meaning more or less "to your health." Depending on where one is from in Ireland, the pronunciation varies, but anything from SLAN-cheh to SLAWN-chuh and you're in the ballpark. Especially if all concerned are in an advanced state of refreshment.