A church with a bowling alley's a bit out of the ordinary. Epiphany of Our Lord Catholic Church is also a school, though.

What? Your school didn't have eight lanes and an arcade with a smoking lounge and bar? Or a Lenten fish fry in the gym next door? 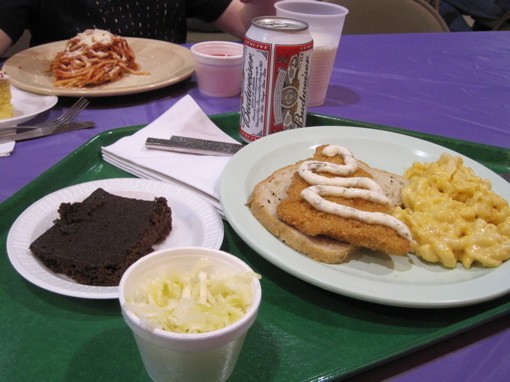 Having learned from last week's St. Pius melee, we arrived early and joined the line, which was already long. Members of a Girl Scout troop patrolled the queue with boxes of cookies for sale. Not that there's enough time to snack. The line at Epiphany moves quickly and begins with the dessert table.

There's homemade angel-food cake, yellow cake with sprinkles, giant brownies and little Styrofoam cups of applesauce and Jell-O. They look like Jell-O shots. Surely they're not, but in a church with a bowling alley and a bar, anything's possible.

A man dishes salads -- slaws both creamy and vinegary, a three-bean salad and beets. When asked if the beets are pickled or Harvard, he shrugs and says he doesn't know. Assuming they're not pickled, we opt for the two slaws. A finely chopped fruit salad looked homemade.

Next stop's the fish and hot sides. The cod's triangular, breaded in crumbs and most likely from a frozen box (judging from its uniformity). Fried shrimp and halves of bone-in jack salmon are also available, along with spaghetti and macaroni and cheese.

The food's not bad, but it's not homemade. It's better than stuff hawked by a singing novelty fish.

The sweet-and-sour slaw stood out: crunchy with the a good balance in sugar and vinegar.

The desserts redeemed the main course, even though the Jell-O was sans alcohol. The lofty angel-food cake had the cloudlike airiness and baked meringue flavor that comes from someone who knows her way around a mixer and some egg whites.

Filled with frozen fish, cans of Busch and Bud and pounds of cake, we were ready to work off some post-meal sluggishness by bowling a few frames, only to learn that a league was coming in at 6 p.m. No lanes would be available for the rest of the night.

(For the fab German-style slaw. Everything else came from a can and cost 'em that fifth fish.)

(Would have been 5 had any lanes been open)

(Keep the leagues out on fish fry night, and Epiphany'd get 5 fish even if they served live minnows)