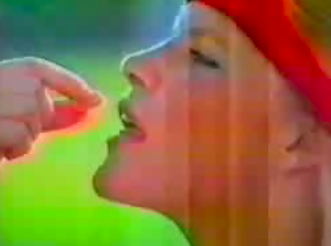 Food products come and go, often with good reason. What seems like a good idea might leave diners gagging in retrospect a decade down the road.

Some products die because they're a bad idea. But some, perhaps, were killed by really questionable advertising campaigns.

5. Swiss Miss Pudding Bars, 1982 It's hard to compete with Jell-O, a company known for making pudding. It's even harder to do so when that company has Bill Cosby hawking its frozen-pudding-on-a-stick product. Why even bother? Well, if you're a cocoa company with a few marionettes at your mercy, why the hell not?

4. Chiffon Margarine, mid-1970s Not just one ad, but a series that ran throughout the 1970s that we should perhaps have heeded: Quit with the fake butter or suffer the consequences. Not only are we dealing with the horrors of hydrogenated oil 35 years later, but we also have to see that drunk chick from Will and Grace dancing with a tub of fake butter. Mother Nature would not approve.

3. McDLT, mid-1980s Ah, the salad days -- that time before an actor scores a role on a hit show -- say, Seinfeld -- and has to sing for his supper. Possibly while dancing, perhaps wearing a hairpiece, and praising a doomed McDonald's creation that not only slapped a cold wad of American cheese on a burger, but created twice as much Styrofoam waste as a pre-assembled burger. The McDLT still exists, as the Big n' Tasty, except it's all smooshed together. Which is neither hot nor cool.

Freshen-up isn't technically extinct. Like all things tawdry, it can be bought wholesale online.

1. Take Five Little Casseroles, 1979 Cooking takes time that can better be spent participating in roller disco. Not everyone had a microwave for quick meals in 1979, and the exotic Asian flavors of Top Ramen in little Styrofoam cups frightened many Americans. Combine the easy prep of ramen with the flavors of good ol' American freeze-dried meat-based casseroles, and people had the extra time and nutritional fortitude required to peel away skintight, sweat-soaked shiny Lycra hot pants at the end of a long day at the rink.