Update: The very patient PR department at Kahala Corp has responded to our questions. See the latest at the end of this post.

To review: A lawsuit filed in Madison County, Illinois, alleges that sandwich chain Blimpie doesn't provide double-meat portions on its "Super Stacked" subs, as advertised. According to plaintiffs' attorney Mark Brown, interviewed by Gut Check yesterday, "[The lack of a true double portion of meat] was something [the plaintiffs] discovered while in the restaurant, and it was confirmed with a conversation with the people behind the counter."

The weight test carried two caveats: First, Gut Check bought the sandwiches from a Blimpie inside a gas station's minimart, not from a standalone store. Second, the double-meat sandwich wasn't branded as a "Super Stacked" sub. I restate those caveats now because they are crucial to the latest response from Blimpie's parent company, Kahala Corp.

After Kahala's initial response, which seemed to blame the individual store but didn't address the issue of the sandwiches' weight as compared to the company's own nutritional information, I sent a follow-up email. The response arrived yesterday evening:


Thank you for allowing us to clarify. The menus at restaurants in Wal-Mart and convenience stores (where we understand you purchased your sub) do not offer Super Stacked(tm) subs, nor do they offer a double meat option. Instead, they offer "extra meat," which will vary in serving size and price from store-to-store based on the franchisee's discretion.

The statement continues after the jump.

Based on your description of the sandwich that you received, it appears that the restaurant location that you visited was extremely generous in providing "extra meat" on your sub. A regular Blimpie Best(r) sub calls for 2.4 oz. of meat, as compared to the 5 oz. of meat that you state you received. You received more meat on your "extra meat" regular than you would have received on a Super Stacked sub, which calls for 4.8 oz. of meat.

Prior to the allegations in the pending complaint in Madison County, Ill., the Blimpie headquarters had not received any complaints concerning the meat portions on its Super Stacked subs.

Again, we appreciate your feedback and invite you to follow our press page for any updates concerning our Blimpie(r) restaurants.

To the first point: It might very well be Blimpie's policy that Wal-Mart and convenience-store Blimpies offer "extra" rather than "double" or "Super Stacked" meat. However, the specific convenience-store location that we visited does offer a "Double the Meat" option on its menu board, pictured below. 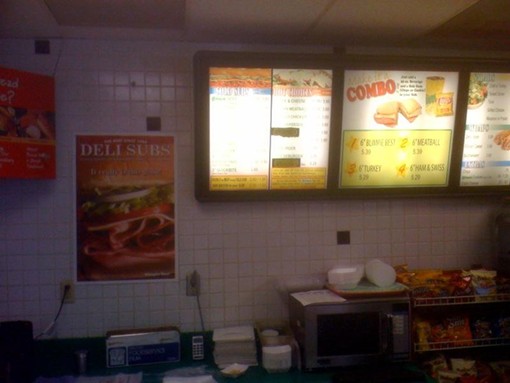 Admittedly, the photo isn't great. However, if you click to enlarge it, you will see "double the meat" as an option in the yellow box on the leftmost menu panel.

That leaves 2.74 ounces (77.68 grams) of sandwich unaccounted for. What should comprise those missing 2.74 ounces, if not meat?


Although Blimpie is happy to answer questions, we are well off-topic of whether Super Stacked subs have double portions of meat. Made-to-order food will always have slight variances, but that is very different from suing over whether Blimpie provides what it advertises, i.e., double the portion of meat.

In an effort to specifically answer your question, we can share some possible scenarios to illustrate the slight variances made-to-order food is subject to. Since the meat is sliced-to-order, each slice can vary by thickness, density and circumference. In addition, as the sandwich maker is adding the meat to the sandwich, human nature being what it is, he or she could lose track of the number of slices that have been added. Likewise, the sandwich maker could add too small of a slice of tomato, onion or cheese or lose track of the amount he or she is adding to the sub. Furthermore, each loaf could have a slightly different density and even each half could be slightly different in size since it is hand-cut. These are just a few examples as each Blimpie Best sub is made with 12 separate ingredients and subject to the variances all made-to-order food will have. That being said, the Super Stacked sub recipes and build charts provided by Blimpie to its franchisees have always called for double portions of meat, as compared to similar regular sandwich counterparts.

Despite the slight variances, our loyal customers appreciate the quality and taste that comes from a sandwich that is made-to-order right before their eyes with the freshest ingredients.