Mangia Now Non-Smoking, The Scottish Arms Will Be 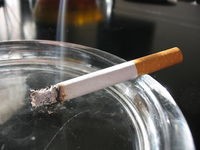 The smoking ban is still ten months away, but some restaurants aren't waiting. Mangia Italiano (3145 South Grand Boulevard; 314-664-8585) went non-smoking as of this Monday, March 1. In January, A to Z posted an interview with new Mangia chef David Timney about the reasoning behind the (at the time, still under discussion) decision.

Today comes word that The Scottish Arms (6-10 South Sarah Street; 314-535-0551) will be non-smoking as of August 1. Owner Alastair Nisbet says smoking will still be allowed on the outdoor patio and that a heated tent is planned for smokers during winter months.

What other restaurants have gone non-smoking ahead of the ban? List them in the comments, and I'll put together a omnibus list.