Tom Coghill didn't come to the professional kitchen because of a deep-seated desire to cook or a long family history in the kitchen.

"I got arrested when I was a kid and I needed a job, so I got a job at a French restaurant," he says with a gruff laugh while sitting at the bar during lunch rush at Iron Barley, the south-city institution he opened in May 2003.

Coghill's rarely seen without an Iron Barley bandana wrapped around his head and a cigarette in his hand. He says little, laughs a lot and doesn't suffer fools or bullshit. It's difficult to envision him in the white-coat environments of his past -- St. Louis hotels like the former Adam's Mark and the downtown Hyatt, followed by a decade at Frazer's.

After years of working for others, Coghill knew he needed to set out on his own or move on, although there weren't many options. 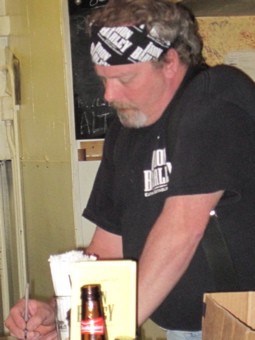 "That saved me," Coghill says of his appearance on Diners, Drive-Ins, and Dives, thumping a worn copy of Guy Fieri's book that's always on the restaurant's bar. "It was tough going. We were going through some changes, cutting back on hours. They called me out of the blue and came in and filmed in 2007. It aired in March 2008. That was a long, hard six months, waiting for that to air. It put us up where we needed to be. I can't thank [Fieri] enough. I still pick up the phone once and a while, call the production company and thank them.

"Same thing with Man vs. Food<" Coghill goes on. "After that it was literally overnight. Aired on the 31st of March and on April 1st it was on. That ain't no joke. You only get one shot at that. If you're going to pull that off. There's no amount of money you can put down to pay for that. I wish I didn't have to wait for a national spot for the locals to figure out we're here."

Even with the big-time attention, Iron Barley remains a neighborhood fixture without being a tourist trap. And that's how Coghill likes it.

"I just wanted a little place, enough to cover the note here and cover the note at the house," he says. "I'm not one of these whores who needs to be on the busiest corner in town, or the busiest place in town. I'm happy where I'm at. I like being part of the neighborhood, and that's all I ever wanted. What's happened has been beyond me. I had no idea."

His mantra is simple: "This is the way I like to eat. I don't follow trends or what they're doing, whatever region's influence on it. 'St. Louis fair with south-side influences,'" he intones.

And then he laughs that laugh.