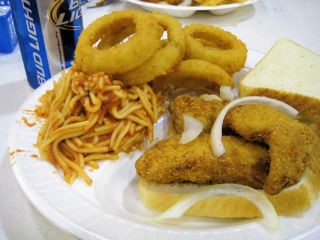 Fight the tiny, congested parking lot in front of the learning center's gymnasium, or prepare to take a small hike from the back parking lot, because it's busy.

Enter the crowded gym, turn left, procure a $2 can of Bud Light or Bud Select via the concession-stand window, then turn right and get into the snaky line. If you're carrying out, skip the line and follow the signs to the to-go window.

St. Henry doesn't offer entertainment beyond good people-watching and raffles for a hand-embroidered baby blanket and a Wii. Fish fry's more about visiting with friends and strangers than dinner theater.

The menu doesn't provide many surprises. Fried cod cut-ups are available in one-pound or half-pound increments, in sandwiches or as a plate with two sides. Opting for something not fried? There's a salmon encrusted with sun-dried tomatoes and pine nuts on the menu, though no one appeared to be ordering it.

The cheese pizza came delivered from Domino's. Plentiful servings of spaghetti, cooked a bit past al dente with a mild sauce, is virtually guaranteed to induce flashbacks to any non-Italian who grew up in the Midwest during the 1970s. Which isn't a bad thing.

A woman mixed a large bowl of homemade vinegar-dressed slaw. Otherwise, side dishes were of the frozen-and-fried variety, evidenced when an order for hush puppies was met with, "I'm sorry, but we didn't get the order in."

No hush puppies? A sign that there is no God?

Regardless, they're doing the frying right. Onion rings and fries came out crisp and fresh, highlighted with dribbles of malt vinegar.

The fish, too, benefited from someone's hot-oil skills. The Illinois standard cod cut-ups are fish in nugget form instead of fillets. The crumbly breading's crisp and dark golden-brown, filled with tender, flaky fish moist enough to not require the packets of tartar sauce on the tables. 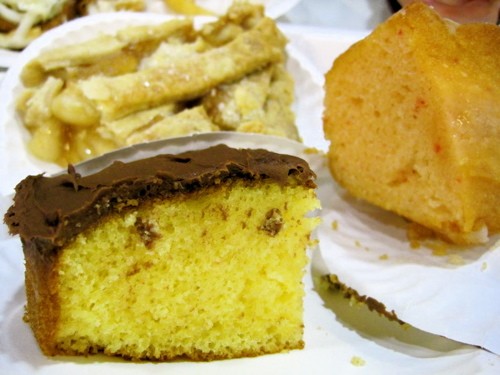 At the end of the meal, as the fish fry was closing, a woman from the dessert table approached with a carry-out box filled with apple pie, cherry bundt cake and yellow cake with chocolate icing. "If you give me a dollar," said she, "I'll give you all of this."

(No hush puppies, but given a break for homemade slaw)

(bonus fillet for being on clearance)

(failure to serve Stag in Belleville's a misdemeanor violation)