Whenever we go out for a fancy dinner, we feel a bit like a little girl playing dress-up in mom's heels. In fact, tonight we are wearing borrowed clothes from a fashionable (and charitable) girlfriend who agreed to dress us for this evening. Sipping a sidecar, we think, is helping us pull off the illusion that we are very, very sophisticated. Not that there's much of anyone to convince. Outside, snow is falling. Inside Franco, on this quiet Monday evening, only a few other tables are occupied.

Though wool is one of the traditional gifts for the anniversary, the seventh, that we're celebrating, our date is long past having the wool pulled over his eyes. The other traditional gift for seven years is copper. We are, at this stage, like a well-loved copper pot -- not shiny and new any more, but dulled with the patina of use; scratched and dented, even, but still the one you reach for. 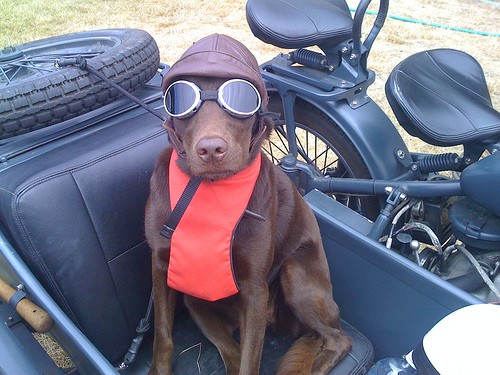 The sidecar is the right drink for this occasion. It has been around forever, but that's because it works. Traditionally it is made with equal parts brandy, orange liqueur and lemon juice, and served straight up with a sugared rim. Franco's take on this classic doesn't depart from the formula, but it does subtly refine it with a few well-considered choices.

First, the brandy is Maison Surrenne Petite Champagne Cognac, made exclusively from wine from the Petite Champagne region of France, distilled one small batch at a time in pot stills. Soft and approachable on its own, when mixed with Cointreau and fresh-squeezed lemon juice, it yields a delicate, balanced cocktail. Floating on the surface is a lemon peel -- not the sad, scrawny paring that so often passes for a twist, but a wide swath that looks to have been cut, recently, with a vegetable peeler, and thus contributed a healthy spray of lemon oil to our drink.

We ask Alex, our server, why it is listed on the cocktail menu as the "Nico Sidecar." He points to a huge black-and-white portrait of a fat-cheeked smiling baby with wild hair and explains that it is a picture of Franco, the owner's nephew, the one for whom the place was named. Then he says, "Nico is his other nephew." Franco obviously got top billing here, beaming from behind the host stand, greeting every guest who walks in. Nico you have to go looking for, which we hope he doesn't feel too bad about -- his is a damn fine drink.

We start with raw oysters, bringing to mind a poem by Anne Sexton:

Oysters we ate, sweet blue babies, twelve eyes looked up at me, running with lemon and Tabasco. I was afraid to eat this father-food and Father laughed and drank down his martini, clear as tears.

Eating oysters still seems to us like a very adult thing to do, like drinking coffee while reading the newspaper at the kitchen table. We manage just fine, though, sucking them down whole, with just a bit of mignonette sauce, knocking back our share of the dozen in a matter of minutes. Our companion points out that our too-big borrowed sweater keeps slipping from one shoulder. He knows we are only playing grownup. We finish our elegant cocktail, named for a child, and lick what's left of the sugar from the rim.