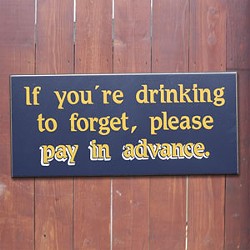 After reading this week's feature story on smoking ban loopholes, the thought may have crossed your mind that someone at RFT headquarters must have spent a whole lot of time recently studying up on St. Louis' drinking establishments.

Indeed. In order to compile a list of all the places in the city and county that will likely be exempt from the smoking bans that take effect next year, we had to look over documents that contained the names of every single bar, tavern, lounge and club licensed to pour liquor in the city and county. That's more than 1,600 watering holes in the two areas combined.

The experience was not an unpleasant one. Here are ten establishments with monikers that either left us laughing out loud, scratching our heads, or thirsty for a nice stiff drink.

10. Playboy Cappuccino Lounge (8500 N Broadway)
When Hef wants an espresso and some hot wings he heads to the Baden neighborhood.

View Larger Map
7. R.P. McMurphy's (1401 Salisbury Street)
R.P. McMurphy is a salt of the Earth kind of guy. He's been around, drank his share of booze and been in more bar fights that Patrick Swayze's character in Roadhouse. No, we've never met the owner of this fine establishment, but we have read One Flew Over the Cuckoo's Nest and seen the movie in which Jack Nicholson starred as the protagonist, one Randall P. McMurphy.

5. Smugglers Inn  (1757 Woodson Road)
This is either a set-up for police entrapment or the place Han Solo stopped in for a drink on his way to making the Kessel Run.

4. The Drinking Horn (2317 McKelvey Road)
On one hand, it could mean they serve their drinks in trumpets, trombones and tubas. On the other, it could mean it's frequented by mead-swilling vikings. Either way it rocks.

View Larger Map
3. Gorgeous Gent's Social Club (2707 North Taylor Avenue)
Is the owner a gorgeous gentleman or is that just a requirement for the customers? Doubles as the best band name on the list.

2. Valerie's Sit & Sip Lounge (3701 Sullivan Avenue)
Now we're getting serious. This is a classic neighborhood bar name. It is understated yet clever. Casual but colorful. It says: expect no chugging here, no dancing -- only friendly conversation and casual drinking.