"Who doesn't need more meat in the morning?" Hardee's flack Jenna Petroff inquired when reached by phone this morning.
To further the double entendre, Petroff is referring to double sausage in the morning. As in the "Double Sausage Egg 'N' Cheese Biscuit," the St. Louis-based fast-food chain's latest entry in the awesomely unhealthy market niche of fast-food breakfasts.

The Double Sausage Egg 'N' Cheese Biscuit went on sale at the 55 St. Louis area Hardee's locations on Tuesday morning (you can't get it at Carl's Jr., which specializes in lunch and dinner). It'll set you back $2.39 (or $4.09, if you include "crispy Hash Rounds and a beverage").

Behold a photo of this heart-stoppingly awesome bad boy after the jump. 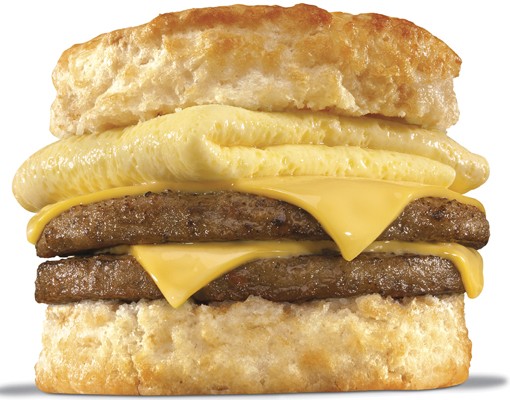 From the press release:

"Our Sausage and Egg Biscuit has been a staple item on the breakfast menu for years," said Brad Haley, executive vice president of marketing for Hardee's Food Systems, Inc. "The only way to improve a classic was to make it twice as meaty, and therefore, twice as delicious. It won't take two of these to fill you up in the morning."

The Double Sausage, Egg 'N' Cheese Biscuit consists of folded egg, two sausage patties and two slices of American cheese packed in between a freshly-baked Made from Scratch™ buttermilk biscuit.


In case you missed it, them eggs are "folded."

All it needs is a little bacon to make it perfect.

If you're looking for something with which to chase your Double Sausage Egg 'N' Cheese Biscuit, may we suggest the Baskin-Robbins Chocolate Oreo Milkshake (2,600 calories)?