Burns, a celebrated Romantic poet, champion of Scottish culture and the writer of "Auld Lange Syne", is beloved by Scots. His January 25 birthday is celebrated every year with recitation of his poetry, Scotch whisky and the ceremonial carving of a haggis.

Burns' connection to St. Louis? Most obvious is the statue of the man at the corner of Forsyth and Skinker Boulevards, donated by the Burns Society in 1928 and restored in 2008. And then there's the large percentage of Midwesterners who claim Scottish ancestry.

So why then has the only Scottish bar (with "Scottish" in its name, at least) in St. Louis never had a proper Burns Night supper?
It seems some Arms regulars were conferring one evening and noticed the outrageous incongruity. Filled with Scotch pride and probably Scottish liquid, they dreamed up a night brimming with Burnsian pleasures, ranging from the traditional -- bagpipe music and a Scotch tasting -- to the borderline deranged: a Robert Burns look-alike contest. (It makes one think of zombie Burnses.) 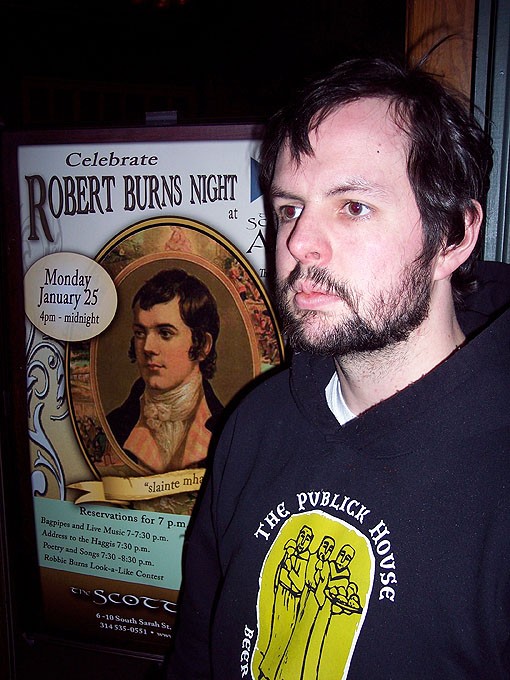 Unfortunately for the many enjoying the festive atmosphere of the full bar, the St. Louis community's answer to the look-alike contest was a resounding no. Perhaps some traditionalists thought it would be too strange a practice for a Burns Supper, but any event that includes the recitation of Burns' "Address to a Haggis" couldn't be too stodgy to ban a game of dress-up.

Amongst the dozen or so kilts twirling around the bar and dining room last night, not one Scotsman showed up in a crevat and waistcoat to pay tribute to man the Scots call The Bard. The night rebounded from that disappointment, as most embraced the spirit of the evening. The Celtic music was in top form and the Scottish Arms' near-ridiculous selection of whisky -- $25 for a whisky tasting -- inspired even Polish and Irish celebrators to toast Robbie Burns with vigorous abandon. Beers were downed and haggis was tried and several lame William Wallace accents were attempted, though thankfully no one took to shouting "Freedom!"

The natural joy of the evening seemed uncharacteristic for a place that had never hosted a proper Burns Supper before. How did this come together and why now?

One of the Burns devotees who planned this event let slip a few backroom secrets (on the condition I would not reveal his name as he works for the Schlafly Tap Room, home to a much better-established Burns Night celebration.) 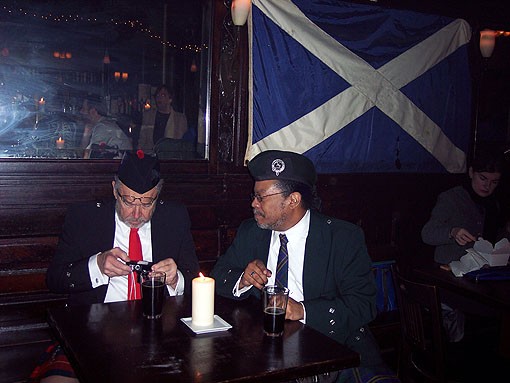 He and his co-conspirators thought that while the Tap Room's event was a fine tribute to Mr. Burns, the only Scottish bar in St. Louis should have a larger crowd on Burns Night than they have had the past few years. He admitted that "last year there were about four tables (of diners), a couple of people at the bar and Ali (proprietor Alastair Nesbit) mumbling a Scottish toast and cutting the haggis." This was apparently less exciting than it sounds.

So this group of heroes vowed to get the public to show up in 2010, and despite the failure of the admittedly ill-conceived Burns look-a-like contest, their scheme resulted in a rousing Monday night and certainly inspired more than one reveler to remember the name Robert Burns. In a twist of irony, the one notable absence in this year's packed house was that Mr. Alastair Nesbit, called away on some important business, according to my source.

Lets hope he found a haggis to address and carve somewhere because, if last night at the Scottish Arms was any indication, a proper Burns Night Supper is not to be missed.