January 12, 2010 at 2:00 PM
comment
Ah, coffee. I love the comfort of the morning coffee ritual: the first sip, the way a warm mug feels in my hand, the permeating aroma as I get my day going. But woe was the Novice Foodie this past summer when my doctor said I had to cut out caffeine for a while to ensure I wouldn't drop dead at a moment's notice. Well, technically, I wasn't on the verge of death, but she did say that drinking a pot or so a day might be contributing to my anxiety and/or random heart palpitations. She had a point.

Anyway, while I did get off the sauce for a while, I've resumed my coffee drinking -- in moderation, of course. In previous jobs, I always had a cheap drip machine in my office so I didn't have to drink whatever crap communal coffee was in the kitchen or break room. This may have contributed to my pot-a-day habit. Now that I work from home, I use my French press as both a better brewing method for my tastes and as a method of moderation. Since my daily coffee consumption is now about a cup and a half, I want that cup and a half to be a quality cup and a half.

So how do I brew the perfect cup of coffee?

I already had a few steps in place to ensure that my brew would be sublime. First and foremost, I needed good beans. My local favorite is, far and away, almost anything from Goshen Coffee in Edwardsville. I'm partial to the Old School Tattoo blend, but I'm currently working on a bag of 222 Bakery Blend. City folk like us don't have to go all the way to Edwardsville to get Goshen; you can pick it up at Local Harvest Grocery or Straub's. 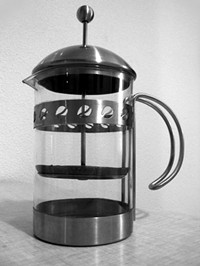 Second, I use a French press. Many people, including myself, believe the French press to be superior because no filter is used. When you use a paper filter, that filter captures much of the coffee's natural essential oils, which produces a weaker brew. Coffee brewed properly in a French press not only retains essential oils, but the ground beans are completely surrounded by water, adding even more flavor to the brew.

Third, I grind my own beans. Coffee grinders are relatively cheap and take up little counter space. They're a no-brainer to me. These three steps alone ensure, at the very least, a nominally-good cup of joe in my own home.

Local coffee enthusiast and STL Bites blogger Bill Burge pointed me in the right direction to take my brewing even further toward perfection. He warms both his French press and a glass measuring cup with hot water while his water heats in the tea kettle. He also takes his kettle off just before it whistles and pours it into the measuring cup first and then into his French press. This allows the water to come much closer to the desired brewing temperature of 198° F.

I also discovered I could get a much more balanced brew if I actually took the time to measure out my coffee. The recommended amount is two tablespoons per six ounces of water, so I need approximately four tablespoons to fill my French press. Goshen also recommends using only filtered water, so I busted out my little-used Brita to see if this step was necessary for me. Finally, I needed to watch the time I let the coffee brew. Too often, I get distracted doing other parts of my morning routine and forget that I have coffee waiting to be pressed. Most sources recommend four minutes of steeping before pressing the coffee.

What can I say? I did a test-run of the perfect cup of coffee today, and I really did notice a difference. My cup was smoother and more balanced and tasted...well, just about perfect. Will I continue making the "perfect cup" every morning? For the most part, yes. While I probably won't warm my French press first, it's not difficult to take a little extra time to measure my beans properly and set a timer, and using filtered water won't be difficult, either. Either way, I'm making coffee light years beyond the burnt slurry served at a certain ubiquitous chain coffee, and it's cheaper, too.