Throwback of the House: Resolve to Make 2010 Miserable with Soup of Oat Flakes

January 04, 2010 at 12:45 PM
comment
New year, new beginning, new fad diets. Why should things be any different for the Throwback? Instead of focusing on weight loss via artificial sweeteners and chemicals, I'm going the opposite route with the 1970 edition of Michael Abehsera's Zen Macrobiotic Cooking.

I debated this one, since I refuse to poke fun at foods simply because they are foreign. There's nothing wrong with ancient Zen cookery. Zen, after all, is a revered way of life (that is, when it's not synonymous with pulling it out of my ass, such as "Zen navigation" or "Zen parenting").

The macrobiotic part is fair game. George Ohsawa introduced the term in 1959. Some of his ideas were good and much-needed: whole grains, vegetables and legumes are good; refined foods are bad. It also discourages overeating, which makes sense, though I question the claim that overeating causes schizophrenia.

Other ideas, like aiming to subsist on nothing but brown rice and small, chewed portions of tepid water, tend to cause conditions like malnutrition and death.

That's right. You're supposed to chew your water. I tried and drooled it all down my front.

Rule #2 in Zen Macrobiotic Cooking: "Use only subtle spices." If flavor isn't Zen, then Soup of Oat Flakes is Zen in a bowl.

Toast quick-cooking oats ("oat flakes," which are refined). Cut onions into "moons." The recipe doesn't specify which phase of the moon, so I opted for halves for balance. Sauté in corn oil (also refined) until golden. Place oats and onions with a pinch of salt into six cups of boiling water. Simmer for 20 minutes. Garnish with a splash of soy sauce. 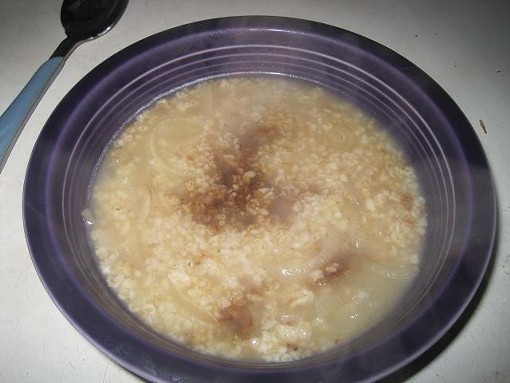 Macrobiotics claim eating such foods leads to longevity. If I had to eat this gruel every day, I'd pray for sweet death's quick arrival. Soupy, over-cooked oatmeal with the jazzy flavor of mushy onions and a tang of fermented soy. I can promise that I will never, ever eat enough of this to make myself schizophrenic. Or even slightly silly.

Though if this is what Gwyneth Paltrow ate during her years of microbiotic eating, I totally understand why she ran off to Spain with Mario Batali. I hope he butchered a pig in her honor.

Robin Wheeler is the author of the blog Poppy Mom and a regular contributor to Gut Check. After years of making and eating fancy food, she's returning to the basics: recipes that haven't surfaced in three decades. She reports on the results every Monday.