A Table for How Many? at Lafayette Fire Company No. 1

December 30, 2009 at 1:00 PM
comment
Firefighters, we were told during our meal at Lafayette Fire Company No. 1 (1801 Park Avenue), have something called a Supper Club: Members take turns cooking dinner for each other, and the chef of the night gets complete control over the menu. When compared to Supper Club, our Dinner Club seems like a club for wusses. We don't cook. Our members get to choose anything on the menu; we don't force them to try new things. There is no risk of an alarm going off and the whole group hurrying off to go save someone's life. 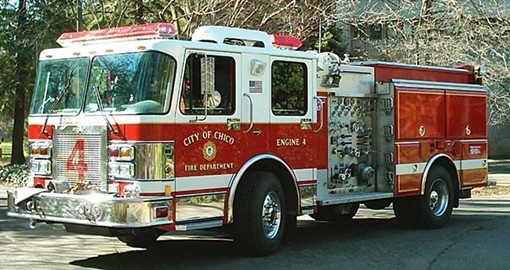 To give us a small idea of what Supper Club is like at a firehouse, Lafayette Fire Company has an item on the menu called "Supper Club." Ordering the Supper Club ($7.99) means that you'll end up with a plate of whatever the chef wants to serve you. Dinner Club members who took the plunge and delighted in the anticipation of their mystery order ended up with pasta con broccoli.

You Can Yell Across the Room

When we arrived at Lafayette Fire Company, the hostess didn't yet know who our server would be. She told us that if we needed anything, we should "feel free to yell across the restaurant. We are not against yelling!" How fun!

Lafayette Fire Company doesn't advertise itself as a kid-friendly restaurant, but it would be an ideal place to take a group of children. (Just say, "No," to Mickey D's!) With yelling allowed and firefighter décor all over the place -- including my favorite, a fire hydrant beer tap -- kids will enjoy the atmosphere (though maybe not as much as at the former occupant of the space, the candy-filled Soda Fountain Square).

Somehow I don't think Lafayette Fire Company is going to print this out and hang it on the wall, but I'm awarding them the Best Split Check Award of 2009. Not only did they divide the check up for our group without errors, but we were also delighted to find that shared desserts (which typically appear on one check, often randomly selected by the server) were split between the checks of the sharers. We've never seen that before in all of our Dinner Club days.

One reason to take your group to Lafayette Fire Company is to show your support for our area firefighters. Its website states that part of its proceeds benefit Backstoppers and the Missouri Children's Burn Camp. Our Dinner Club members loved this idea, and we had a larger than usual turnout because of it.

However, if we didn't know about this before coming, we wouldn't have found out about it at the restaurant. Our server didn't mention the donation until we asked about it. When we did, he explained that we could make a donation to those organizations by rounding our bill to the nearest dollar or by simply leaving extra money. That sounded easy enough, but, there was no line on the credit card receipt for donations -- we just had to write them in -- and those leaving cash had no way to differentiate between extra money left for tip and extra money left for a donation.

We attributed most of this confusion to the fact we were there on the restaurant's fifth day of operation, and we're sure that it will iron itself out. Tabletop descriptions of how the donation works and information about the charities would be a good start.

Stefani Pollack is the author of the Cupcake Project. She is also a member of the St. Louis Dinner Club. She blogs about her large-group dining experiences twice a month.

A Table for How Many?